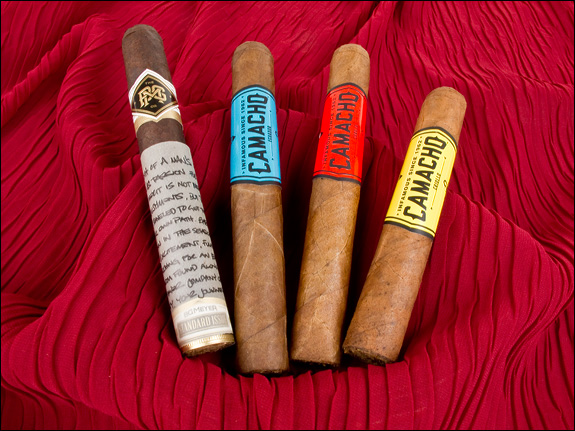 I remember years ago, when I first started smoking cigars, I was told to “start mild”.  These words made the specter of strong cigars loom large over my fragile, newbie spirit.  I was downright afraid of strong cigars!  Would they make me sick, or worse, turn me into The Hulk?  Ironically, my first great cigar was about as strong as they get: the Tatuaje Cojonu 2003.  Yes, it kicked my butt, but also illustrated just how flavorful and fascinating cigar smoking could be.  Since then I’ve enjoyed cigars of all strengths, from easy-going to powerhouse.  But I recall one brand to which those early warnings were always associated, Camacho.  This brand had a reputation of being one tough customer.  Even its name was intimidating…Ca-MACHO!  That first year of experimentation gradually led me through a number of popular brands, eventually taking the plunge into full-bodied cigars.  Once having become seasoned enough to venture into the danger zone, I steeled myself enough to order a Camacho sampler.  To my surprise, these cigars didn’t seem that strong.  I couldn’t understand why they had a reputation for being so high-octane.  Perhaps it was that I’d cut my teeth on Tatuaje, or that I started smoking cigars just as the ligero craze was taking off.  But one thing I did notice was that Camacho cigars were full flavored, if not overtly powerful.  They also had a smooth quality that I learned, over time, to appreciate as the hallmark of this fine Honduran brand.

These days, the cigar industry is running at break neck speed.  New players are emerging everyday, each trying to make his/her mark in a highly competitive market.  This is best achieved by creating cigar blends that get noticed.  That means lots of strong, high-priming tobacco from the richest soil on the planet.  This, in the hands of a master blender, can create some head-turning cigars that could garner critical acclaim, and strong consumer loyalty.  We see this happening often in the exploding world of boutique cigars.  These small startup companies have set a new standard for flavor and strength.  For established cigar brands, this new paradigm presents a challenge.  In order to meet the growing demand for bolder cigars, many familiar names have gone back to the drawing board.  Some have added new, stronger cigars to their existing lineups, while others have reformulated their entire lineup.  What was once considered strong is now simply not strong enough.  This is where we come full circle: to Camacho.

Camacho Cigars has a long history.  Founded in 1962 by Cuban exile Simon Camacho, this brand has always made top quality cigars in the Cuban tradition.  Today, Camacho is owned by Davidoff, but continues to manufacture its cigars at their Rancho Jamastran factory in Danlí, Honduras. 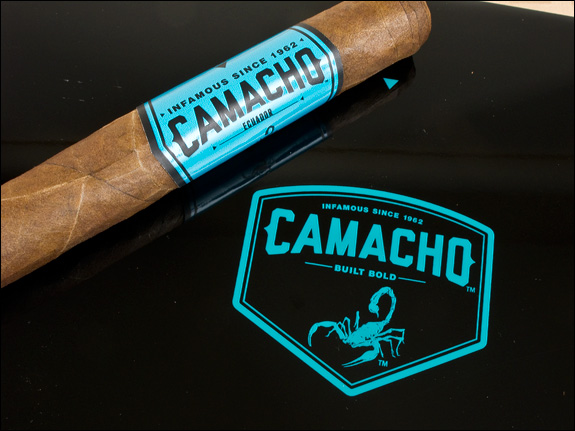 The Ecuador was a standout.

After many years of perfecting its core brands, Camacho recently announced its new “bold” strategy.  With a new look, and many new blends, Camacho is taking aim at the new breed of cigar smokers who are looking for bigger cigar flavor.  I had read about this, but until recently, hadn’t given it much thought.  This changed when I stopped into a local cigar store.  There, I met a retiree and lifelong cigar smoker, smoking a Camacho Ecuador.  He said he liked strong cigars, and my interest was piqued.  On my way out, I picked up the new Camacho Ecuador, Criollo, and Corojo cigars.  I wanted to see how these new blends stacked up against their more traditional cigars.  That evening I smoked the Ecuador and could immediately see its appeal.  With big flavor, lots of complexity, and the smoothness of well-fermented tobaccos, this was a cigar I could smoke everyday.  It had what I look for in a great cigar: tons of flavor without a huge nicotine hit.  I’ve since bought a box of the toros, and can’t put them down.  Its four-nation blend (Ecuador, Brazil, Dominican Republic, and Honduras) is well balanced and harmonious. With flavor that builds throughout the length of the stick, the Camacho Ecuador is as advertised…bold.

The Corojo and Criollo offerings were equally impressive.  The blenders at Camacho really know their tobaccos.  Each cigar was carefully constructed to augment the flavors inherent in its name.  For example, Corojo is a leaf usually used exclusively for wrapper.  But here, the entire blend is Corojo…wrapper, binder, AND filler!  Needless to say, this full-flavored tobacco makes the Corojo the strongest of the new blends.  By using only high-priming leaves, Camacho has created a cigar of outstanding character and complexity.  Its notes of black pepper dominate, but don’t overpower the more subtle flavors of this outstanding blend.  The Criollo has a Corojo binder, but its strength is tamed by using Honduran Criollo, and Dominican Piloto Cubano filler.

With these new lines, the blenders at Camacho were careful to create cigars of varied and distinct character.  It is a tribute to their experience and knowledge that they have done this so successfully.  All the cigars I’ve smoked in their new lineup had their own unique personality and flavor profile.  Bold in both flavor and strength, yet all smokeable in one sitting. 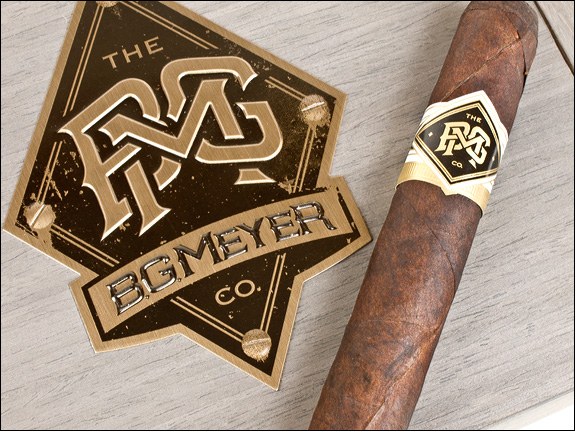 The BG Meyer wrapper is thick and hearty.

One other stick I bought that day was the BG Meyer Standard Issue.  I have since smoked it completely “blind”, knowing nothing about the cigar, and it immediately grabbed my attention.  With intense flavors that hit the palate fast, I was struck with notes of dark chocolate, citrus, and spices.  A quick Internet search revealed that the BG Meyer was also a new Camacho blend.  It is part of their “Board of the Bold” series.  Blended as a vanity brand for Rob Weiss, the producer of the HBO series Entourage, it is one of three such side projects for Camacho.  (Mike Ditka and Matt Booth also have their own blends.  I look forward to trying those soon.)

The Meyer Standard Issue is a Nicaraguan puro, with tobaccos from Estelí, Jalapa, and Ometepe.  Its Habano wrapper is thick and hearty, with a rough, rustic quality.  You can tell its been basking in the sun, soaking up loads of strength and flavor.  And with its easy draw and great construction, the palate is bathed with layers of thick, rich smoke.  Much like the other new Camacho blends, this too is a departure from anything they had done before.  But the one thing common to all these blends is their smoothness.  All the tobaccos used in these cigars are perfectly fermented and aged, ready to be smoked immediately.  But with so much intense flavor, they are likely to get even better with age.

Each Camacho blend had its own unique character.

It is rare to smoke a brand sampler, and be impressed with every cigar in the bundle.  This is especially true when each stick has a noticeably different flavor profile.  Yet each one of the four new Camacho cigars I sampled was box-worthy (I settled for only two, the Ecuador and BG Meyer).  But these weren’t simply good cigars, they were all outstanding.  Each cigar was a testament to the experience and expertise of the storied Camacho brand.

Along with the vision to see the changing cigar landscape, Camacho has the know-how and resources to blend cigars that will resonate with future cigar smokers.  They have successfully transitioned from making traditional Cuban style cigars, to providing experienced, modern smokers, the cigars they demand.  Yes, “bold” is the right word for these new blends, and newbies should not take this lightly.  Unlike my experience years ago, these Camacho cigars should be approached with caution.  Now, more than ever, there truly is macho in Camacho.