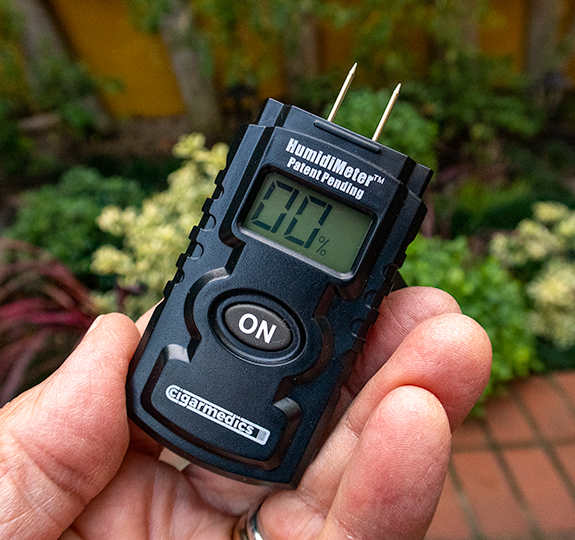 Cigar humidity measured from within!

Cigar smoking is a lot of fun. And collecting cigar accessories is part of the enjoyment. Some of my friends scour the internet looking for cigar-related gadgets and often find things that are useful. Putting aside the wristwatch that doubles as a cigar lighter, one such item is the CigarMedics Humidimeter.

What is this thing?

The Cigar Medics Humidimeter is a clever adaptation of a moisture meter. Such a tool is traditionally used to measure moisture in walls or wood. Lou Lucente, the creator of the Humidimeter, appears to have used the Stihl Digital Moisture Meter design as a model. However there are two significant modifications. First, he has put the probes closer together. This allows a smoker to insert the meter directly into the foot or cap of a cigar. By doing so, we can measure the cigar’s internal moisture and determine if it is in peak smoking condition. Secondly, the Humidimeter converts moisture content to relative humidity. This is key because cigar smokers judge the condition of our cigars in RH percentages. With a digital readout in percentage of water content, a moisture meter would show a well-conditioned cigar at about 15%. However, the Humidimeter displays this as 70% RH. CigarMedics recommends the RH range for a well-conditioned cigar to be between 65% and 68%. I use 72% Boveda packs in my humidors; this puts the cigar moisture right in the recommended range.

The CigarMedics website has links to some informative videos that explore the history and functionality of the Humidimeter. One such video is an interview with the founders of CigarMedics John and Lou. Here they discuss the internal moisture dynamics of a cigar. This is something I never considered, and it is an eye-opening revelation. Here are some key points of this discussion:

A cigar is a tube of moist tobacco with one end open (the foot) and one closed (the cap). Moisture wicks from the open end and works its way down the length of the cigar. There, the cap traps the moisture. This means that from foot to cap, a cigar becomes progressively more humidified. This can be verified with the Humidimeter. Taking my own measurements, I observed that, indeed, the foot of the cigar did average a few percent lower in moisture content than the cap. This might explain why the second half of a cigar is harder to keep lit than the first. It may also be a factor in why cigars change flavor as they are smoked.

This makes me wonder if we should store our cigars with the caps cut. This would allow moisture to wick from both ends and keep it from building up inside the cigar. Potentially, this might provide a more consistent burn as the cigar is smoked. As an experiment I have cut the caps off all the cigars in my desktop humidor. Over the next few weeks, I hope to see what affect this will have. 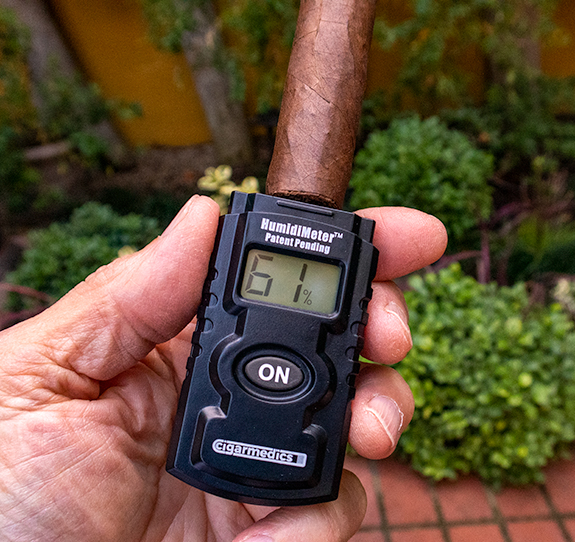 The foot is the driest part of the cigar.

Not all cigars are created equal.

In measuring several different cigars, I noticed that the more densely packed sticks gave a higher moisture reading. This may be because a moisture meter works by measuring electrical resistance between its probes. I’m not an electrical engineer, but my guess is that the tighter filler pack might conduct electricity better than looser tobacco. This makes me wonder if the higher reading at the cap is partially because the filler gets compressed when the cap is rolled.

Lou Lucente also mentions that candela tobacco produces a low reading. Does that mean, in general, different tobaccos will produce different results? But even if this is true, the value of the Humidimeter isn’t compromised. The margin of error isn’t big enough for this to be an issue. All my cigars registered between 61% and 68% at the foot…all good enough to smoke.

It is also important to note that a cigar needs to be measured several times…rotating the stick with each new reading. An average of all the measurements will give the best assessment. 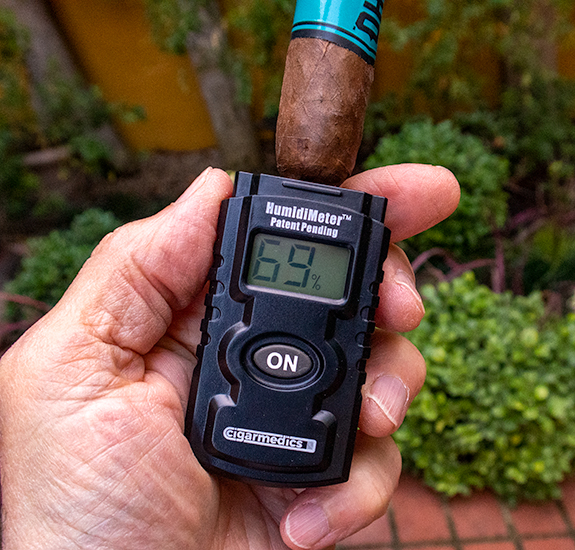 Moisture gets trapped by the closed end of the cap.

CigarMedics also offers a soft case for their Humidimeter. However, I received one gratis when I bought my Humidimeter. There is no need to buy the case separately.

At first, when my friends started buying the Humidimeter, I thought it was unnecessary. My cigars usually smoked well, and my humidors are well maintained. But since buying a Humidimeter I have been able to delve deeper into the world of cigars. I’ve become interested in measuring every stick I smoke. Although owning a Humidimeter is certainly not a necessity, it does add a layer of fun, and provides some useful information about my cigar collection. And, it may have changed the way I store my cigars in the future. This will soon be determined, and I’ll post the results of this “experiment” when concluded. This is empirical cigar smoking at its best!