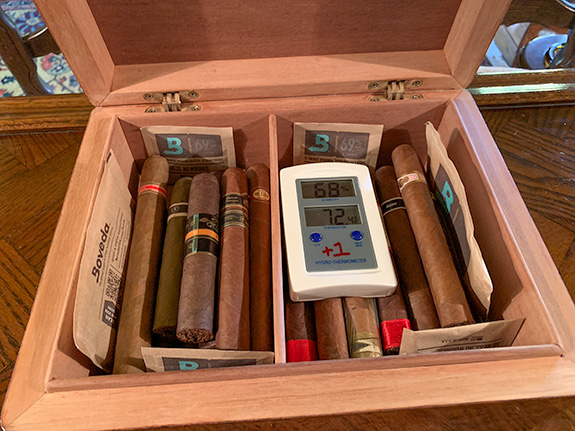 That’s a good question. Boveda humidification packets are relatively new, and a great product for keeping our cigars well-conditioned inside a desktop humidor. And because they come in various sizes and humidification ratings, they are also good for humidifying cigars on the go. But in a wooden, desktop humidor, it takes a few Bovedas to maintain proper humidity. I like surrounding my cigars with the packs. That way my sticks are protected from the dry, outside air on all sides. But at some point they will dry out and need to be replaced. This made me wonder if I could save money by rehydrating the packs that have expired. Now, I’m not a scientist, nor a Boveda expert, but I’ve been doing some experiments to see if I could successfully “recharge” the parched packs.

My first experiment was to put two dry Boveda packs, one small and one large, in a food storage container along with a sponge saturated with distilled water. I was careful not to let any water come in contact with the packs. My thinking was to allow the Bovedas to gradually absorb moisture, mimicking how the packs work, but in reverse. Over the next few weeks, the Boveda packs gradually absorbed moisture and got bloated with water. So yes indeed, Boveda packs can been “recharged”. But did this process compromise their performance? To check this, I used a hygrometer that had been calibrated using a new Boveda pack. As it turned out, a 69% pack that measured 69% when new, now measured 76% (after recharging). (Because relative humidity [RH] varies with temperature, I was careful to do these measurements in the same ambient environment). So although it’s technically possible to rehydrate them, it seems a recharged Boveda can not be trusted to put out its stated RH rating . 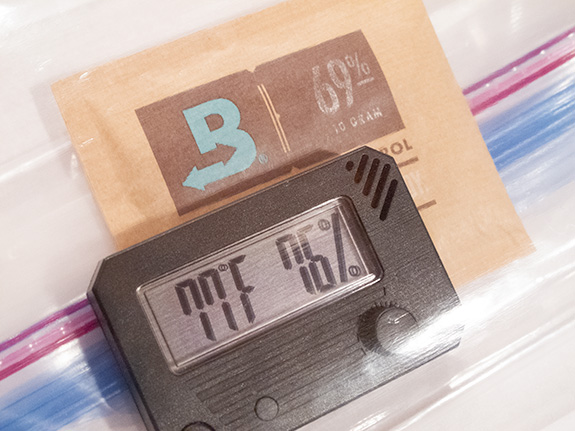 A rehydrated Boveda measured higher than its rating.

Another, less elegant experiment was to douse a Boveda pack with water. In this experiment I moistened the pack directly with water and put it in a plastic bag. This rehydrated it quickly and within a few days the thing was full. Once removed from the plastic bag, the surface of the Boveda dried out quickly and looked fine, with no apparent damage to its outer “skin”. Although I didn’t actually measure its output, I would assume this method would, as in the other experiment, compromise the packs calibration.

Although these experiments were crude, they gave me useful information. Going forward, I’ll put only new, trustworthy Boveda packs in my desktop humidor for accurate humidification. But for temporary storage and quick, “in the ziplock” type transportation, I’ll keep a bunch of rehydrated packs on hand. They will come in handy for sure.

2 Responses to “Can Boveda packs be rehydrated?”