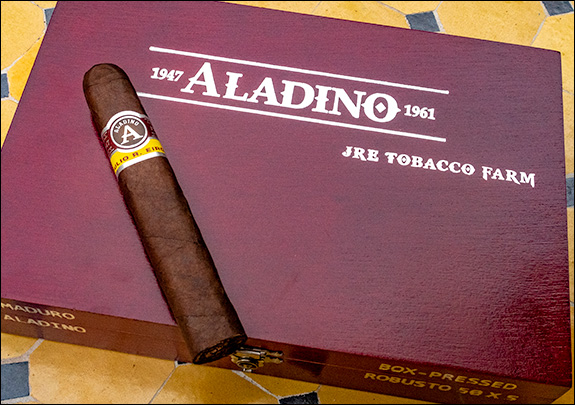 If you are an empirical cigar smoker like me, then you smoke cigars critically…always checking those mental boxes for flavor, balance, construction, and strength. Over the years we create an internal data base of all the cigars we’ve smoked. That, in turn, influences how we judge each cigar going forward. For myself, I like to smoke a lot of different cigars. I have a vast data base of, perhaps, hundreds of different cigars I’ve smoked over the years. For critical cigar smokers there is an endless search for the perfect puro. We compare every cigar we smoke against an ideal that exists only in our minds. Yet once in a great while, we discover a cigar that not only checks all the usual boxes, but actually exceeds our expectations and delivers something special, and unexpected. The Aladino Maduro Robusto BP was such a cigar, and it has started me on a journey of discovery through the entire Aladino brand.

A bit of history.

Aladino is one of three brands made by Julio R. Eiroa and his son Justo. The JRE website describes the Aladino as “a true ‘Classic Old-Fashioned Cigar’”, and  “a ‘puro’ of authentic Corojo grown in the Eiroa Tobacco Farm in Honduras from the original Cuban seed of Corojo.”  Corojo is the prized wrapper leaf originally grown in Cuba between the 1930’s and the 1990’s. It got its name from the farm, or vega, on which it was grown, Santa Ines del Corojo in Pinar del Rio. Today, due to its susceptibility to Blue Mold and Black Shank, no Corojo is grown in Cuba. The Eiroa farms in Honduras is one of very few to grow “authentic” Corojo from original Corojo seed. Although Corojo was traditionally used exclusively for wrapper, Julio R. Eiroa uses it for binder and filler as well. With the exception of the Aladino Maduro, which has a San Andres wrapper, the Aladino cigar is 100% Honduran Corojo.

The Eiroa family has tobacco farming in its DNA. Their lineage traces back to Cuba where Julio’s father, Generoso, had been growing tobacco since the 1900’s. But after the Cuban Revolution, and the nationalization of their farms, the family relocated to Tampa, Florida. Eventually, Julio settled in Danli, Honduras, and in 1963 began cultivating tobacco for Camacho Cigars. Soon after, Julio started buying government owned tobacco farms, and, through his expertise, helped establish the Jamastran Valley as one of the premium tobacco-growing regions in the world. 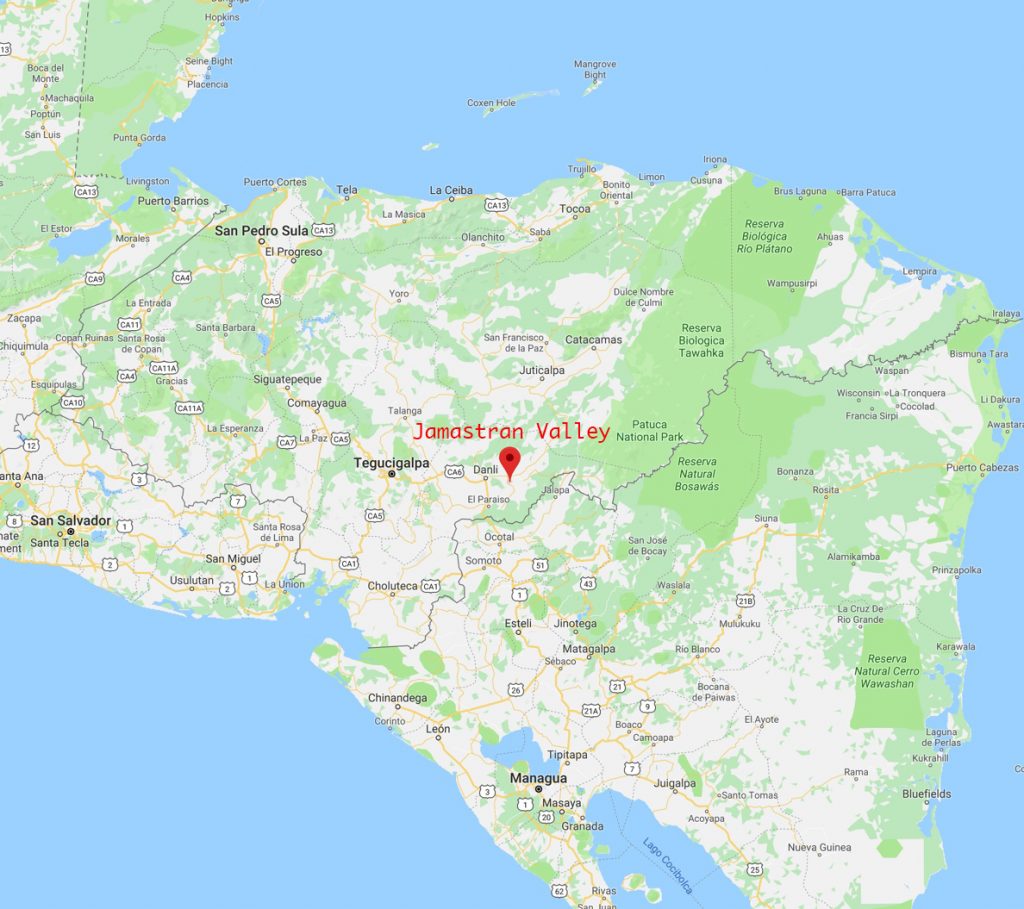 What makes it so special?

When I smoked my first Aladino, I knew nothing of the brand. I chose it because I read it was 100% Corojo. That piqued my interest. I always liked the original Camacho Corojo cigars, before it was re-blended by its new owner, Oettinger Davidoff. I remember it having a Cuban-like flavor profile, albeit much stronger than the commercial Cuban brands. Plus, the addition of the aromatic and rich flavor of a San Andres wrapper made the Aladino Maduro a good bet on a cigar I’d never smoked before.

The Aladino Maduro Robusto BP is small for a Robusto, and gently box pressed. I’d say it’s somewhere between a Robusto and a Corona. It is dark chocolate brown with a rough feel to its flawless wrapper. The cold nose is of delicious ripe fruit from the farmers market. It is a bit soft to the touch, but that is not uncommon for a box pressed cigar. Yet once cut, the draw is found to be perfect, with just the right amount of resistance. Inspecting the foot reveals carefully bunched tobacco of dark brown color. This cigar takes to the flame nicely, and right away the Aladino grabs your attention. The flavors seem to burst in your mouth. There is the initial black pepper blast, then a mix of walnuts, black tea, and leather coat the palate. This is a cigar of seemingly infinite complexity. But most surprising is how the smoke feels in your mouth. It has a soft, creamy quality unlike any other cigar I’ve smoked. The flavors seem to bathe the tongue like softened Häagen-Dazs Belgium Chocolate ice cream. This cigar is absolutely delicious.

The Aladino Maduro has beautiful filler and binder that are bunched perfectly.

As the Aladino Maduro progresses, the strength begins to reveal itself, but it’s not overpowering. It’s the perfect balance between flavor and strength, giving me a giddy feeling of complete cigar satisfaction. This is a cigar I actually admire.

But what makes this so delicious? Perfect construction allows the cool smoke to flow freely onto the palate, that helps; the use of carefully selected tobacco is evident, impeccable cultivation is a must, but the greatest factor may be the generations of tobacco growing knowledge and experience that goes into all the JRE cigars. To find out I needed to smoke other cigars in the JRE line up.

At first glance, the Aladino Corojo looks a lot like a Cuban Cigar. It should. The terroir of the Jamastran Valley is said to be very similar to that of Pinar Del Rio. Additionally, this Corojo wrapper is a direct descendent of the most famous cigar tobacco in the business. The Toro I am smoking is fairly large (6 x 50) yet the weight is light in the hand. As with the Maduro, the cap is rather crude; here it breaks with the Cuban tradition of the elegant, triple seam cap. But that doesn’t inhibit me from getting a perfect guillotine cut. The cold nose on this cigar is pure “barnyard.”

As with the Maduro, the Corojo has a perfect draw. Lighting is effortless, and the cigar puts out a lot of smoke. But without the additional sweetness of the San Andres wrapper, this cigar is slightly tangy, with a dry sense on the palate. It opens up with a white pepper spice, along with a bready, yeasty quality. The tang reminds me of a seeded Jewish rye bread. Much like a Cuban cigar, the Aladino Corojo wrapper has “stretch marks.” These remain visible in the ash as the cigar burns down. Additionally, the salt and pepper ash color is reminiscent of a Cuban puro. As with the Maduro, this cigar burns perfectly and needs no touchups whatsoever. At the midpoint, the pepper spice really picks up and a strong herbal quality emerges. There is, however, an underlying charcoal quality that compromises my full enjoyment of this otherwise smooth cigar. At this point, pairing it with a beverage other than water would mitigate this char-like finish. But for the sake of this review, water will best show the true nature of this cigar, warts and all. However, in the final third, the char seems to have dissipated in favor of a more earthy tone, with notes of cedar and pine. I look forward to smoking another one of these, but next time it’ll be with a nice single malt scotch.

This Corojo Reserva Robusto is an inviting cigar indeed. It has a cold nose of roses…literally. It is floral to the max. The wrapper is flawless and dark brown in color. This indicates to me that the wrapper has been processed like a Maduro. The Reserva has a similar, “simple,” cap to the other Aladino sticks, while the foot shows tobacco that has the same rich color as the wrapper. Some large stems are visible in the otherwise random bunching.

The Reserva has a nice draw and lights easily. The first thing I notice is a blast of black pepper. Notes of sage are present as well, and much like the Maduro, there is a “soft,” creamy quality to the smoke. It seems that the darker, more deeply fermented wrapper of this 100% Corojo puro adds a nice sweetness to the blend that is missing from the “non-reserva” version. This provides a nice café au lait element to this complex blend.  Here, again, I find myself looking admirably at the cigar. This is another absolutely delicious cigar from the Eiroa family. If the Maduro was Belgium Chocolate, this is Coffee Häagen-Dazs for sure.

Mid way, the creaminess seems to build, and a nice finish of freshly tanned leather and cedar coats the tongue. I also appreciate that fact that this cigar burns slowly, making for a nice, leisurely smoking experience. I’m an hour into this stick and it’s just past the halfway point. This is a cigar that needs to be smoked slowly, it’s quite strong…more so than the other Aladino cigars in this review. 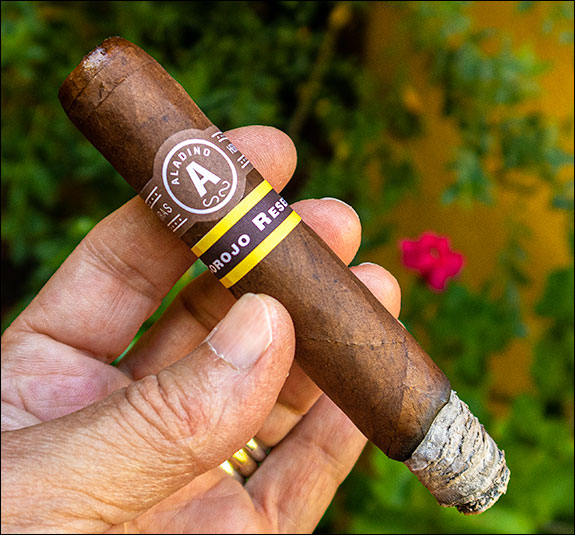 The burn on this Reserva isn’t quite as perfect as the others, and some minor touchups are required. But that’s not a judgement as no two cigars will smoke exactly the same. I’ve smoked a few of these recently and have had no issues. This time around the wrapper has cracked at the last third. But the air is very dry today, and that can cause wrapper issues here in Los Angeles.

At the nub there is no bitterness, harshness, or tongue burn. Just lots of creamy smoke, with enough pepper to keep things lively. The finish leaves you with notes of roasted walnuts, and the complexity builds throughout the length of the stick. This is a truly outstanding cigar.

Smoking cigars critically, rather than purely for enjoyment, can sometimes feel more like work than fun. But reviewing these Aladino cigars was a true adventure, and an exciting experience. I didn’t know where it would lead, but following the trail from the Maduro, through the Corojo, to the Reserva has brought me a new level of cigar enjoyment. My favorite was the Maduro, with the Reserva running a close second. These cigars are special, and I now have a new standard by which to judge everything I smoke going forward. The Maduro has surpassed my ideal vision of the great cigar and introduced me to cigar flavor I had never known.

In the hands of great craftsmen; those who have perfected the growing, curing, fermentation, and blending of some of the finest tobacco in the world, the craft of cigar-making can be elevated to an art form. With the Aladino line, Julio and Justo Eiroa have achieved such a level of perfection. The tobacco grown on the Eiroa farms is truly exceptional, and the Eiroas have made the most of it. I look forward with anticipation to more great offerings from this truly great cigar family. Bravo!