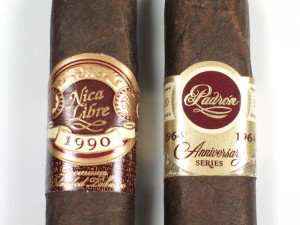 Please note that this is not a review in the traditional sense. The purpose of this article is not to choose one cigar over another, but to compare the similarities of two fine cigars in an academic way.  No winner will be declared but, hopefully, readers will gain some useful knowledge in an entertaining way.  Both cigars were stored next to each other in the same humidor, at 70 degrees and 70% humidity.

One significant difference needs to be mentioned. The Padron was two years old while the Nica Libre was recently purchased. A comparison of two new cigars could have had a slightly different outcome. It’s worth taking this into consideration while  reading this article. Also this cigar comparison was repeated a second time to allow for normal inconsistencies from cigar to cigar.

When Cigar.com billed the Nica Libre as an alternative to the Padron Anniversary maduro, I just had to see this for myself.  I mean, how could a $2 cigar stand up to an icon of cigar supremacy costing four times that amount?  Was this a case of David vs. Goliath in the valley of Jalapa?  Upon learning that AJ Fernandez was the brain behind the Nica Libre blend, I promptly ordered a box.  I have enjoyed everything AJ has created from the Padilla Habano to the Sol Cubano Cuban Cabinet, and felt I had nothing to lose by getting a box of the Libre, sight unseen, especially at $2/stick.

“The fighters are in their corners…”

When the Nica Libre arrived I could see immediately that AJ was going for the same look as the Padron.  The boxes were similar in both construction and finish and the Libre bands were an obvious imitation of the Padron, right down to the look-alike second layer of banding. (See photo above.)

(As a sidebar, the Nica Libre came in cellophane while the Padron cigars were presented “naked” in the box).  For this comparison I chose the Principe vitola and both cigars were virtually the same size and shape i.e. 4.5×46.  The overall appearances of the cigars were nearly identical and hard to tell apart with the bands removed.  Each cigar came boxed pressed although the Libre appeared slightly more “pressed” than the Padron.  However once out of the cello, the Libre soon expanded to be virtually the same thickness as the Padron.  Color-wise the look of the Libre wrapper in the first comparison was slightly darker than the Padron, but in the second test the colors were indistinguishable.  This was well within the natural color variations for wrapper leaf and shows the amount and method of fermentation to have been similar.   Both wrappers felt silky to the touch with the same degree of tooth, suppleness, and overall quality.  As you can see from the pictures it was hard to tell one cigar from the other. 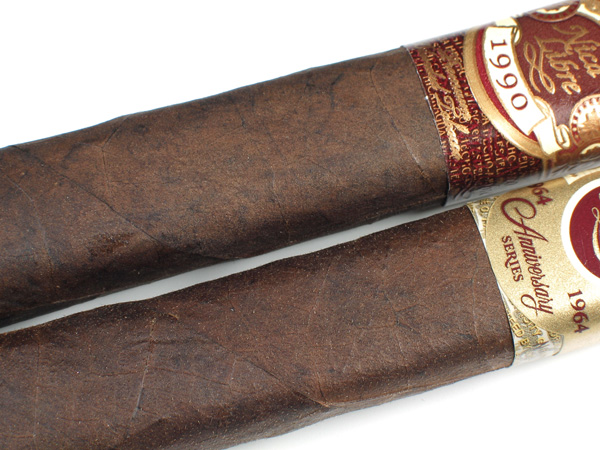 However, one obvious difference between the two was their un-lit aroma.  The Nica Libre had a smoky quality that seemed similar to the Fernandez Signature maduro while the Padron had a more tradition maduro aroma of rich earth.  Would the Libre taste like the Fernandez Maduro as the smell would indicate?  More on that later.

Upon examining the cap, both cigars looked rather crude and neither had the Cuban style triple-cap that has become so popular with other brands.  Both cigars had considerable wrinkling on the cap end.  How well the caps were constructed would be better judged while smoking.  A close examination of the foot of both cigars showed good random bunching of the filler tobacco with very similar internal construction and tobacco coloring.  Virtually no stems were seen inside either cigar, only delicious looking “filet” of tobacco leaf. 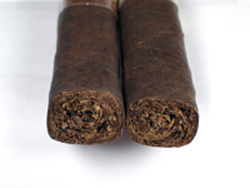 Good random bunching in both. 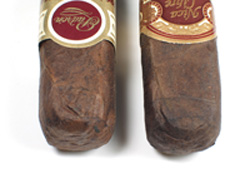 Definitely not a triple cap.

I figured the best way to compare the two cigars would be side by side.  Rather than smoke them on consecutive days, I wanted to be able to compare them in real time.  Using the Cuban Crafters perfecto double guillotine cutter, each head was carefully cut to the same depth.  This was important to evaluate how well the caps were rolled.  Once cut, the overall cap construction of both cigars were very similar and, again, it was hard to tell them apart.  It was then time to apply some heat.  Using a butane torch, both cigars lit equally well and required only the heat of the flame to ignite the foot.  Without puffing it was easy to get both cigars to burn evenly around their circumference.  Now the moment of truth had arrived.  Up to this point the cigars looked alike, but would the initial puffs expose the “imposter” right away?  The first puffs of any cigar are always the most mild and do not necessarily foreshadow the true character of a cigar, but the Padron Anniversary is a full flavored cigar and would let itself be known fairly soon.  After a first few puffs on each cigar, both hinted of deep flavors to come.  But the big surprise was how close both cigars initially tasted.  Sometimes cigars can taste similar to others of similar tobacco blends, but the Padron and the Nica Libre were so close that the differences were too subtle for me to discern.  The true test still remained in how the flavors would evolve over the length of the cigar and how well the construction would hold up.

In the fist comparison, both cigars exhibited a lush draw and a burn rate that produced identical lengths of ash within the same timeframe. The second tasting was different with the Libre having greater tobacco density and a tighter draw.  Perhaps this indicated more consistency in the Padron line but the Libre was well within normal variations from cigar to cigar.   At this point in the first comparison, with the rings removed, discerning one cigar from the other became very difficult.  Only the slight color variation gave it away.  Both caps held up nicely while smoking and there was no unraveling or shredding throughout the length of either cigar.

“This could go the distance…”

In the course of smoking these cigars, it became uncanny how the burn rates were so similar, (although in the second test, the Libre burned slightly slower due to it’s higher density).  It is in this regard that the similarities between the two cigars get downright spooky.  In the second comparison not only were the rates similar, but the actual characteristics were the same.  As you can see in the photos, when one cigar burned unevenly, the other did as well, and in much the same way.  When one burned more on the left, the other burned more on the left.  When one burned more on the right, so did its counterpart.  It was as if these cigars were twins with the same cigar DNA!  This was true in both sets of comparisons (the photos are of the second test).  My theory is that since both cigars shared virtually the same tobacco, construction, and conditioning, then whatever environmental condition that made them burn crooked was shared equally by smoking them at the same time.  The only difference being one was in my right hand and the other in my left.

It was about the mid-way point that the difference in flavor started to make itself known.  As the smoking progressed, the Padron started taking on a quality that was spicy and dry while the Libre became sweeter with more fruit overtones.  Additionally the Padron seemed to get stronger while the Libre remained the same strength throughout.  In order to fully explore these differences it became necessary to stay with one cigar for a while and not smoke them “puff for puff”.  Getting a groove going with each cigar was important to allow for an appreciation for what each cigar had to offer.

The second half of the cigars was quite a different experience than the first.  Perhaps I was getting a little “smoked out” by attempting two cigars at the same time, but at this point the Padron seemed very strong.  I found myself going for the Libre by preference simply because it hadn’t progressed as far as the Padron.  The Libre had become quite fruity and retained the medium strength it showed at first.  By comparison the Padron tasted like a powerhouse, with dry black pepper and espresso.  This is not meant as a value judgment but rather an observation.  The Padron Anniversary Maduro is consistently enjoyable to the nub and its taste evolution is a desirable attribute.  But after smoking two cigars simultaneously, the lighter quality of the Libre was appealing.  This experience was true for both tests although in the second comparison this difference was less pronounced but still apparent.  My curiosity about whether the Libre would taste like the Fernandez Maduro was now put to rest.  The Libre tastes nothing like the Fernandez Maduro.

We cigar smokers perceive flavors and strength differently from one another, and no two smokers will agree as to what the best cigar is.  But in the matchup between the Padron and the Nica Libre, what started out as very similar smoking experiences, ended up fairly different.  Not different in the sense of one being better than the other, but of differing qualities.  Both these cigars are great in their own right.  Each beautifully constructed by master blenders with generations of experience, using some of the best tobaccos from the fertile soil of Nicaragua and Ecuador.  The Nica Libre is billed as a less expensive alternative to the Padron, but if you are a dyed-in-the-wool Padron smoker, the differences in the two cigars would ultimately not convince you.  However, to the smoker who enjoys the occasional Padron, and tends to smoke lighter blends, this cigar is not only a less expensive alternative but a delightful new cigar to enjoy over and over again.  In essence, the Nica Libre could be billed as “Padron Light”.  Similar in many respects, but without the gradual build in strength and spice that is characteristic of the Padron line.  But if a blatant attempt to copy the formula of your favorite cigar offends you, I suggest you not be.  After all, isn’t imitation the most sincere form of flattery?