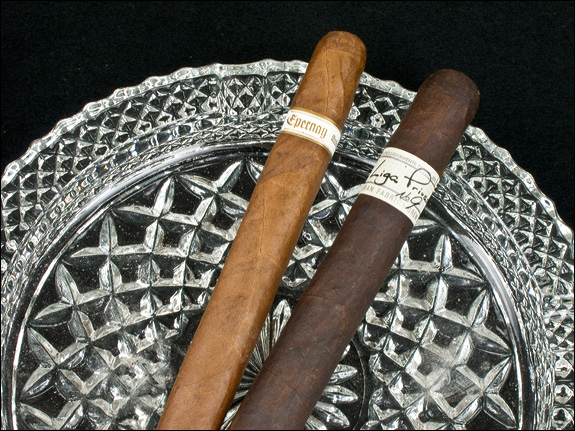 Is a very dark cigar “un-natural”?

How many times have you smoked a cigar in public, and had someone ask, “Is that a Cuban?”? When you explain why it is not, they are always surprised to hear that great cigars can be made outside that large Caribbean island. Without getting into the endless debate of Cuban (CC) v. Non-Cuban (NC) cigars, let’s just say that with the proliferation of NC cigars came new flavor profiles that differed from the “traditional” flavor of the CC.

Cigar smoking has been around for centuries, and for most of its long history, the best tobacco came from one place…Cuba. Although the United States had a thriving, post Civil War, cigar industry, it used tobacco grown primarily in Pennsylvania and New England. Unfortunately, this tobacco was crude and harsh.[i]  It’s well documented that, back then, the best cigars made in the US used tobacco imported from Cuba. The delicate, floral quality of Cuban tobacco was perfect for making cigars of broad appeal. It is true even today, that the flavor of a great CC is a singular pleasure.

After the Cuban revolution, many great Cuban cigar makers and tobacco farmers fled the country. Having relocated to the Caribbean and Central America, they used their expertise to cultivate tobacco in soil dissimilar to that of their mother country. Although grown from Cuban seeds, the soil composition and different climates (the terroir) produced tobacco with new, and different, flavor characteristics. Cigars rolled with tobacco from Nicaragua, Honduras, The Dominican Republic (and others), have their own, unique flavor profiles. Today, the quality of non-Cuban cigars can rival the best of what Cuba offers. But, the NC flavor profile can be so different from that of the “traditional” CC, that it gives me pause.

This article started out as a review of a cigar I’ve been enjoying lately: the Surrogates Satin Glove. It’s a mild, yet full flavored cigar, with a very dark San Andres wrapper. This gives the Glove an earthy sweetness that lasts ‘till the nub. Its size reminds me of a fat lancero (or skinny Churchill), with the concentrated flavor inherent in a thin cigar. The San Andres wrapper is very popular these days, and is a fairly new invention; a far departure from Cuban cigars.

The “Glove” tastes great, but has me wondering…

Being a cigar critic, I started to rate this against other cigars I’ve enjoyed. But its flavor is so drastically different from what I call traditional that it led me to wonder: is there a “gold standard” for cigar flavor? For a cigar to be truly great, must it pay homage to the cigars of yesteryear, and have traditional cigar flavor?

I really enjoy smoking the Satin Glove, but there’s something in the back of my mind that keeps me tied to the notion that a great cigar needs to hark back to its roots. It’s like the Blues. It’s the tradition on which Rock ‘n Roll was founded, and gives it its attitude and drive. Maybe I’m a sentimentalist, but as in music, I like to taste the heritage in a cigar’s flavor. But the Satin Glove tastes nothing like a CC, and yet it’s a cigar I truly enjoy.  Why does this give me angst?

Cigar flavor has evolved a lot over the last ten years. “Dark and earthy”, or “spicy” are recent terms used to describe new, more powerful, types of NC cigars. To me, the dark wrappers, now in vogue, have a distinct flavor that can boarder on un-natural. I know first hand, that many NC cigar makers use betume[ii] to flavor their cigars. I suspect cigars that are black in color, or have an extreme “raisin” like flavor. Tobacco simply can’t get that dark naturally, of have such an extreme fruity flavor. The Satin Glove borders on having such qualities. I don’t know if betume was used in this case, but the cigar has a flavor profile far from traditional. This makes me wonder if ANY cigar, this far from traditional, should be considered flavored. Should any additional processing of tobacco, beyond the traditional drying, curing, and aging, be considered, at least, manipulated? In my opinion, cigars made this way cannot be judged against those made using traditional methods. If athletes are disqualified for using performance-enhancing drugs, why do we judge cigars with flavor boosters against those made naturally?

Today’s cigar makers are an ambitious group. Fueled by a thriving boutique movement, young competitive cigar makers are pushing the envelope of cigar flavor. This is a good thing. New cigar flavor profiles are born every day. The need to make the most powerful cigar, with the biggest flavor, is often the goal of new cigar makers. But I think it’s important not to lose sight of where this all came from. That wonderfully floral, delicate flavor, inherent in a great CC, seems to be getting blended out of existence. Some cigar makers, like Dion Giolito of Illusione, deliberately use lower priming leaves, giving his cigars a more traditional flavor. I applaud that. It’s harder to make a great cigar with subtle, nuanced flavor, than it is to make a powerhouse. When done skillfully, this can result is a sublime smoking experience. 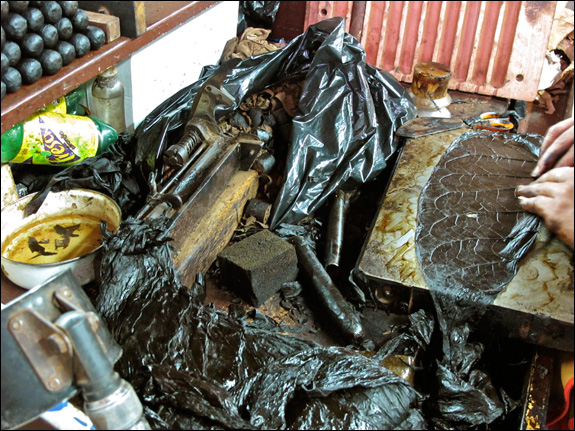 Rolling cigars with betume is a messy job.

Cigar smoking is an adventure, and it’s great to discover new flavor profiles. Although I stay away from cigars that look manipulated, I do enjoy many maduro cigars, and sometimes seek cigars with a fruity flavor profile. But when looking for that truly great cigar, I feel a responsibility to apply some criteria. If I sense its tobacco has been manipulated, it will automatically lose points compared to more natural tasting cigars. A great cigar has a very distinctive flavor and aroma, and many new cigars have lost that wonderful, almost incense-like quality. This serves to show just how far from tradition cigar flavor has evolved. Gone is the wonderful aroma that children recall when reminiscing about their cigar-smoking Uncles, or that neighbor down the street. Traditional cigar-making methods are what give a cigar that quintessential cigar aroma.

The soul of a cigar.

To me, a truly great cigar must reflect its roots. It’s where the soul of a cigar lives. As in music, soul is everything. It’s what connects us emotionally to our experiences. Without the Blues, there’d be no Rolling Stones, Eric Clapton, or Jimi Hendrix. All these musicians learned their craft by studying the great American Blues masters. Without Robert Johnson, there would be no Cream; without Howlin’ Wolf, Led Zeppelin would have never existed. This is true for all the great rock legends. It’s all about their heritage.

So let’s not forget where cigar flavor came from, or stray too far from its tradition. After all, if you take the blues out of Rock ‘n Roll, then you’re left with something that really doesn’t rock at all.

[i] These days, domestic US tobacco is well regarded and used in many popular NC brands.

[ii] Betume is a solution, applied to a cigar’s wrapper to enhance flavor or color. When natural tobacco substances are used, the cigar industry considers it acceptable practice. During the “cigar boom”, unscrupulous cigar makers would use artificial coloring to enhance the appearance of their cigars.