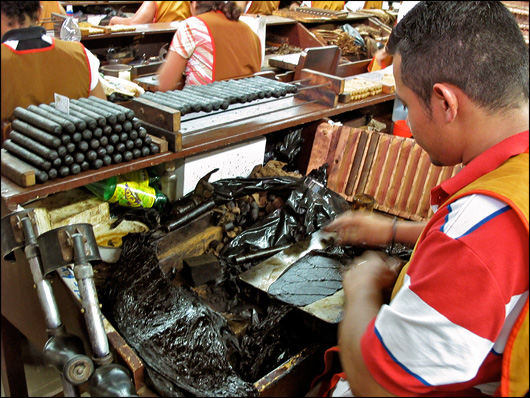 Oscuro cigars in the making.

Cigars come in many colors.  From Kermit green to midnight black, cigar color is the result of fermentation…or so we are led to believe.  In order to fully understand how a maduro wrapper is made, we have to look into the dark side of cigar making.  Although it is generally true that fermentation determines tobacco color, to get a cigar as dark as oscuro (almost black), simple fermentation is not enough.

Let me explain: green cigars (double claro), get no fermentation at all and are “flash dried” to lock in their chlorophyll.   It is chlorophyll that makes all plants green.  The brown colors we normally associate with cigars are the result of varying degrees of curing and fermentation.  During this process the tobacco breaks down, changes from green to brown, and develops its characteristic cigar flavor.  But fermentation is a form of composting.  Too much will leave the tobacco too decomposed to wrap around a cigar.  So, if extra fermentation ruins tobacco, how do some maduro cigars get so dark?  This is where it gets interesting…

It is generally believed that additional fermentation will produce a maduro wrapper.  This will, indeed, darken tobacco leaf and increase its sugar content; two qualities that give a cigar its maduro character.  But to achieve that very dark brown, or even black appearance, tobacco requires additional manipulation:

A brief word about fermentation…

Fermentation is controlled decay, and the great cigar makers have perfected the process over many generations.  The methods are universal throughout the industry: first the tobacco leaves are moistened and arranged in big piles called pilones.  The moist tobacco then breeds bacteria, which produces heat, carbon dioxide, and ammonia.  When the heat reaches a certain temperature, the pilones are taken apart and reassembled.  Then, a second fermentation stage takes place.  This continues until the there is no more trace ammonia and the tobacco is deemed ready for cigar production. 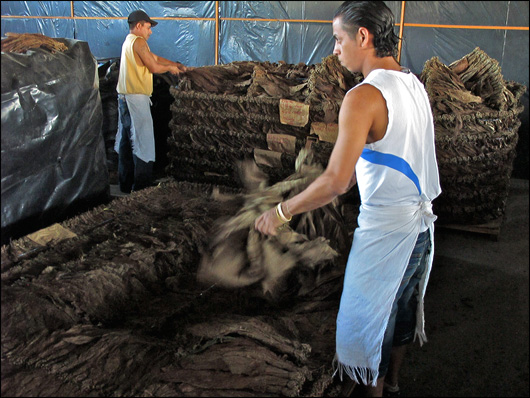 Re-assembling a pilone for a second fermentation stage.

Turning up the heat…

At this point the tobacco is fully fermented.  In order to darken and “sweeten” the maduro leaves, some cigar makers resort to steam.  By placing the tobacco in a steam chamber, the additional heat will darken the leaves beyond that of traditional fermentation.  Since nothing artificial is used, this process is considered acceptable by the cigar making community.  But steam will only make a cigar a shade darker, and not the black color we associate with some maduro cigars.  To achieve such dark shades, many cigar makers revert to “cigar alchemy”. 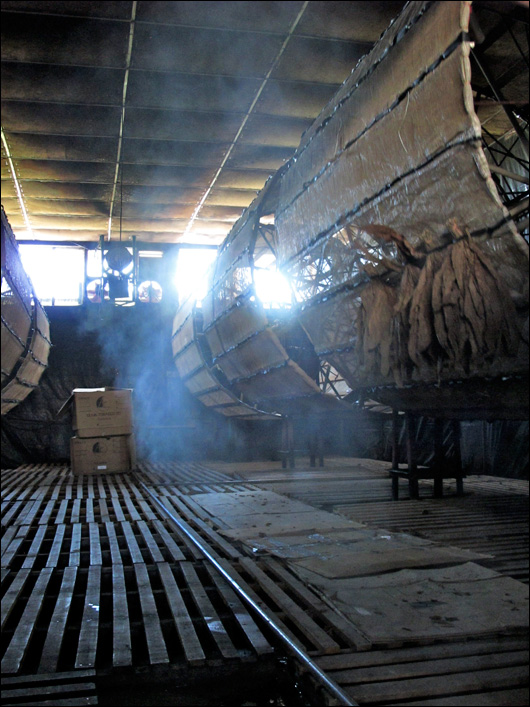 “Cigar alchemy” (my own term), is the secret manipulation of the maduro wrapper.  First let’s talk about the use of a catalyst.  When extra fermentation alone doesn’t do the trick, a sugar solution can be used to “push” the fermentation to the next level.  (A cigar maker inadvertently confirmed this to me.)  To my palate, the use of sugar causes the wrapper to lose its subtle tobacco flavors.  I sometimes find maduro cigars to be less complex than their “natural” counterpart.  Yet some maduro cigars have tremendous flavor.  To achieve this, many well-established cigar makers take the process even further.  This is where the waters get a bit murky.

Ever smoke a maduro and find the flavors to be herbal, in a way that no natural cigar has ever been?  If so, chances are the cigar has been treated with betume (or bethune).  That’s when a solution is applied to the wrapper to add flavor as well as to darken its color.  Each cigar maker has its own recipe for betume, the ingredients of which are a closely guarded secret.  Many cigar makers do this, but will never admit it.  (Again, this information was provided by an anonymous source.)  Cigar making is like prestidigitation.  Magicians will never reveal their tricks, and neither will the cigar industry.  But if a cigar is black and extremely herbal, chances are slight-of-hand is at work.  I, for one, have no problem with the use of betume.  It adds additional flavor and character to a cigar.  As long as the ingredients are natural, I have no objection. 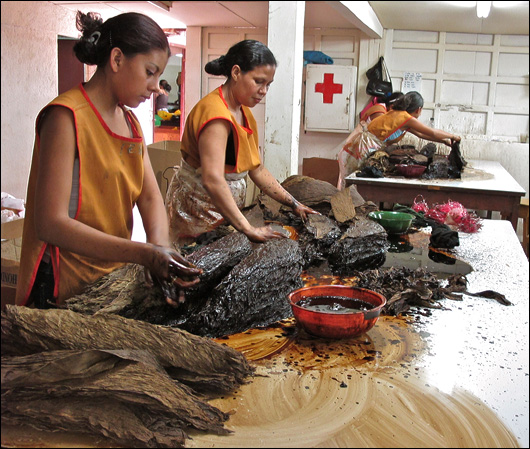 “Evening the color” with tobacco juice is a common practice.

Lastly, we come to a real cigar no-no…coloring.  During the cigar boom of the 1990s, some unscrupulous cigar makers resorted to painting their cigars to simulate maduro.  This not only resulted in cigars that tasted awful, but left the smokers lips and fingers discolored.  These days the practice is still in use, but not as a substitute for natural fermentation.  For example, a coloring agent might be used to “even out” the color of a dark, but mottled wrapper.  To my mind, as long as natural ingredients are used, i.e. tobacco juice, then, in theory, this is an acceptable cigar-making technique.  But such coloring does have its drawback.  If too much solution is used, stained fingers and lips will, indeed, result.  This happened to me with a popular cigar brand.  (To avoid controversy, the brand name will not be mentioned.  But I’m sure other cigar smokers have had this experience.) 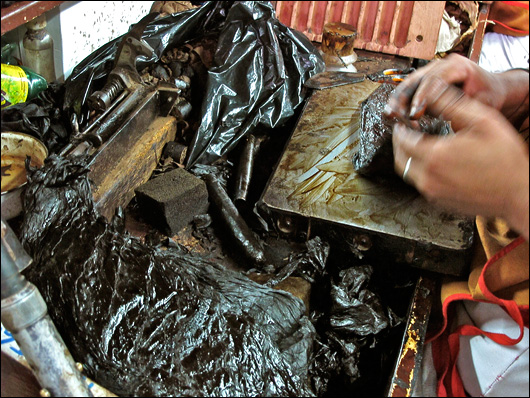 Rolling with treated wrappers is a messy job.

For what it’s worth…

I, for one, will stay away from black cigars.  To me they look unnatural.  But I have enjoyed many dark maduros that have delivered tremendous flavor.  The use of betume can add a lot of character to a cigar, giving it a unique flavor profile.  Variety is the spice of life, and having lots of cigar choices makes smoking that much better.  But I certainly understand the purist’s point of view.  To them, the use of betume would be unacceptable.  Certainly lovers of Cuban cigars would frown on such a practice.  Of all the Cuban brands, there is only one maduro: the Cohiba Maduro 5.  But the use of betume is actually a Cuban invention.  Something practiced by Cuban cigar makers solely for their own personal gratification.  But to those of us who appreciate the variety provided in the Non-Cuban cigar realm, maduro cigars offer a great alternative to the traditional Habano flavor.

As in magic, perhaps we should not look too closely at the trick.  It is more fun to be awed by the outcome, rather than to question the process.  It’s always exciting to see what today’s great cigar makers are going to pull out of their hats.

12 Responses to “The Magic Behind Maduro Cigars.”