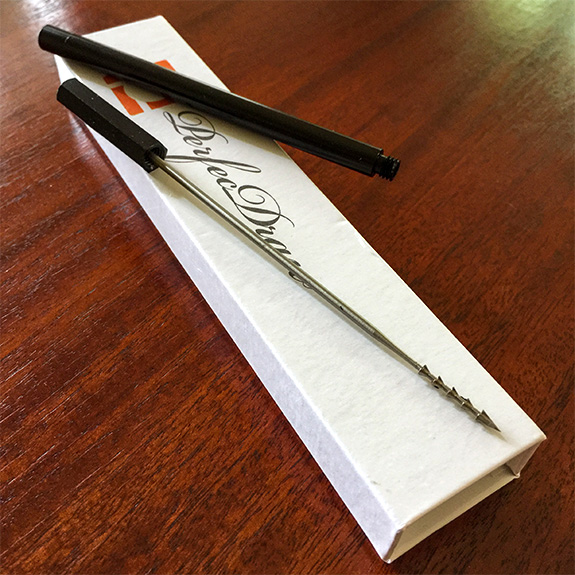 The PerfecDraw is a must-have tool for all cigar smokers.

Plugged cigars are the bane of all cigar smokers. It’s frustrating trying to smoke a stick that won’t even draw enough air to light the foot; and this can happen to any cigar regardless of price, size, or point of origin. I’ve tried all kinds of tools to remove tightly bunched tobacco from a cigar that wouldn’t draw…small screwdrivers, shish kabab skewers, tooth picks, but nothing ever worked. Then I saw my friend Paul pull out this “thing”, and with one motion totally clear the draw of his plugged perfecto. I was gobsmacked! That “thing” he used is the PerfecDraw Precision Draw Adjustment Instrument & Nubber (aka the PerfecDraw). Of course I had to order one, and upon its arrival, was immediately impressed.

The PerfecDraw comes in a box reminiscent of something you’d get from the Apple Store. It’s glossy white, with a magnetic clasp, and the tool within is nestled in a fitted foam slot. In your hand, the PerfecDraw feels heavy for its size. It looks like a narrow, high quality ink pen that has been fabricated from black anodized steel. The instrument itself is screwed into a sheath, and here again, the machining is impressive. Once the tool is removed, a set of gnarly teeth is revealed at the pointed end of a slender stainless steel rod. The PerfecDraw is designed to be inserted into the clogged head of a cigar, then gently withdrawn. In doing so it grabs just enough tobacco to create an air passage. It’s crazy how well this tool can open up the draw of a cigar while removing only a small amount of tobacco. Sometimes one insertion is enough, other times a second, deeper probing is needed to get a sufficient draw. This is an easy process, and works every time; but you do have to be careful not to pierce the cigar’s fragile wrapper.

Since buying the PerfecDraw, I have successfully unplugged a number of cigars. This has allowed me to enjoy my investment and never again worry about encountering a “brick”. That plugged Monte #2?…no problem; that tightly wound solomone?…piece of cake!

We pay good money for cigars, and spend a lot of time and energy to keep them well conditioned. We have to baby our babies, and the last thing we want to deal with is a cigar that doesn’t draw. The PerfecDraw addresses an issue that has plagued cigar smokers for ever, and done so with a great design, solid materials, and nice packaging…and all at a price of about $30. I love this thing and wish I had known about it years ago.

4 Responses to “PerfecDraw cigar tool…where have you been my whole life?!”