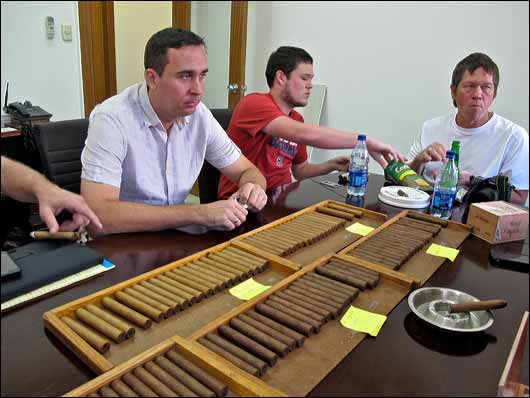 Colin Ganley from Cigar Journal, gets his cigar-tasting game face on.

Want to go behind the scenes and taste cigars right off the rolling table?  Now is your chance to do just that.  Basically, Rafael Nodal and his cohorts at Aging Room Cigars, want to include us in choosing their next great cigar.  They are offering a sampler of pre-production cigars, and we will get to choose which one goes into production.  It’s called the Wildpack, and while in DR, I was able to get a taste of what’s to come.

The Wildpack (originally named Wolfpack), will include ten, 50×6 cigars.  Five blends will be offered, with two cigars per blend. The cigars will be marked only by an identifying number.  Individual cigars will also be available.  After sampling the various cigars, those who participate can fill out an online scorecard in this blind taste-test.   The results of the survey will be tallied, influencing a future, full-scale production run. 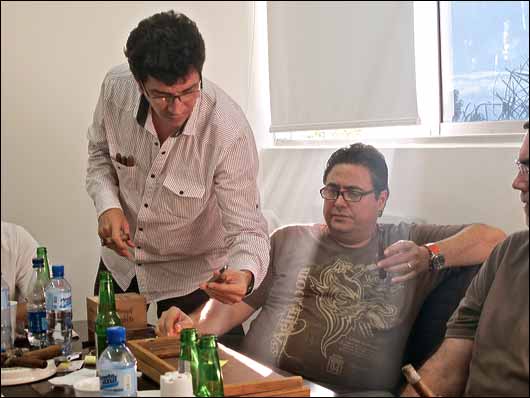 “Joshie” Blanco and Rafael Nodal during a Wildpack tasting session.

While visiting Tabacalera Palma (they make Aging Room Cigars), a group of visitors and I were treated to an early Wildpack sampler.  We tasted five different blends, each with different wrappers.  It was amazing how different each stick tasted; the wrapper changed the flavor profile dramatically.  But all the cigars were terrific.  There was one stick that we felt was a standout, and it will be interesting to see which cigar is ultimately chosen by the public.

The Wildpack is due to hit retailers on June 1.  That’s good timing…we will have good cigar-smoking weather to smoke through the pack.  The winning cigar will be declared sometime in October. 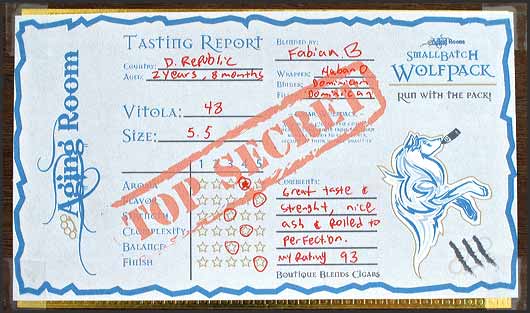 I recommend participating in this “experiment”.  Aging Room makes great cigars and this is an opportunity to go “behind the scenes” with the blenders at Tabacalera Palma.  Cigars will be sold individually for $9.20/stick, or $92.00 for the complete pack of 10.