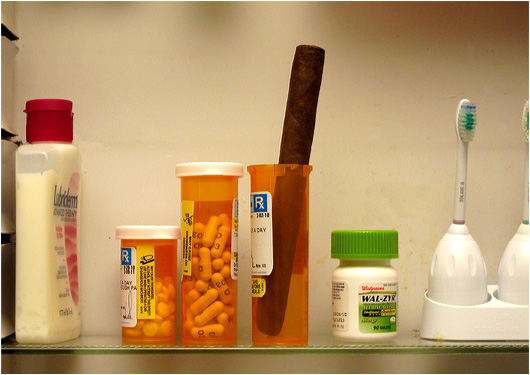 Tobacco and nicotine are under study for medical applications.

While looking for reference material about cigar smoking I stumbled upon a book that instantly grabbed my attention.  Entitled The Health Benefits Of Tobacco and written by a physician, this book went right to the top of my must read list.  Could it be that we cigar smokers finally have an advocate?  I needed to find out if this guy was for real.  I mean after all, the whole world is telling us that smoking not only kills us, but also everyone down wind of the lit end of our cigar.  Now a doctor is saying tobacco is GOOD for us…how can that be?

For such a publication to be taken seriously, it would need a legit authority to back up its seemingly outrageous claims.  Such was the case here.   Its author, Dr. William Campbell Douglass II, MD has a long list of credentials including Doctor of the Year from The National Health Federation.  To my mind, this author gave instant credibility to an otherwise spurious notion.  Growing up in the sixties, I am no stranger to tobacco-smoking doctors.  My father was a general surgeon and recently recounted how his staff had demanded he stop smoking cigars in the office…the patients were complaining.  But to see a respected and decorated doctor endorsing tobacco seemed contrary to all the current anti-smoking propaganda.  Would Dr. Douglass’s theories stand up to scrutiny?  This was something I just had to see.

Not likely a best seller… 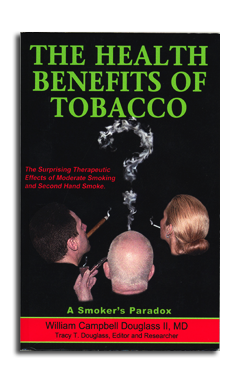 Right from the start one could see that English is not the author’s primary language.  The book is rife with poor grammar and confusing sentences.  But this is not a novel and those reading this book would likely forgive poor literary skill.  Essentially this book is a series of rebuttals for studies that denounce tobacco use.  Case after case is presented, questioned, and ultimately debunked on any number of grounds.  And Dr. Douglass goes beyond simply “proving” the studies to be flawed.  He gives testimony that tobacco use can actually be beneficial in the treatment of many medical conditions.  But lest anyone jump to doubtful conclusions about this notion, I should mention that this claim was independently substantiated in an article from The Los Angeles Times.  In its Health section of the Dec. 20th 2010 issue, the article “Toxic gases can be medicinal” illustrates that substances like carbon monoxide and hydrogen sulfide have useful medical applications.  These are two chemicals found in tobacco smoke.

The problem with studies…

Dr. Douglass makes many good points about medical studies in general and more specifically studies about tobacco use.  In all fields of study statistics are manipulated to form conclusions.  These conclusions are often deliberately slanted to prove a point that reinforces the opinions of those funding the study.  To the author’s mind this is fundamental to the erroneous conclusions of anti-smoking studies.  For example, the CDC (Center for Disease Control) put out a report claiming that smoking causes 400,000 preventable deaths a year.  But upon closer examination we find that: (1) the “victims” lived longer that the general non-smoking population by two years; (2) over 70,000 died “prematurely” at ages greater than 85; (3) only 0.5% of the smoking population died at ages less than 35.  Dr. Douglass then points out that 8% of the general population is dead before age 35 and asks “does smoking prevent death in the relatively young – from murder, automobile and other accidents, infection or boredom?”[i] This is just one example of the many studies to which the author takes exception.

Dr. Douglass also points out that the two countries with the most draconian anti-smoking laws are also the “sickest”: the US and New Zealand.  Paradoxically, Japan with its notoriously large number of smokers has one of the healthiest populations.  But this is not unexplainable and is germane to the problems with medical studies.  Unless ALL the factors are taken into account i.e. diet, exercise, environment, genetic predisposition etc, one cannot simply take smokers and pit them against a non-smoking test group and get reliable data.

Too much of a good thing…

The key to Dr. Douglass’s claim of tobacco as a useful medical treatment is “dosing”.  He is not advocating chronic tobacco use and makes it clear that the amount used must be limited to have positive health effects.  A pack-a-day cigarette smoker will certainly not see positive health effects of such a large dose of tobacco.  But, Dr. Douglass claims, a few daily cigarettes might actually help prevent the onset of many diseases.  Alzheimer’s, Parkinson’s, Tourette’s and even prenatal diseases, can all benefit from nicotine’s medicinal properties.  Additionally it has recently come to light that “nicotine can boost stem cell regenerative power in patients with chronic or congestive heart failure.”[ii] Heart attack patients are able to recover faster with nicotine therapy.  The list of diseases to which tobacco can be used as a treatment seems endless.

Then what’s all the fuss about?

If tobacco has so many uses in the treatment of disease, then why is the anti-smoking lobby so strong?  This is a question that Dr. Douglass does not fully explore and is a subject that needed more of his attention.  He does not address the beneficiaries of the anti-smoking movement, and alludes to the government as its driving force.  But to what end?  After reading his book I am still fuzzy on this subject.

What it all means to us cigar smokers…

In a world of tobacco haters, it’s great to read something that reinforces a notion we cigars smokers have instinctively always known…that cigar smoking, in moderation, is a good thing.  We often take note of celebrities who have lived deep into old age, and have done so with the ever-present cigar between their fingers.  We know the meditative state of mind a fine cigar will induce and the sense of well being it promotes.  These things have all given us the message that cigar smoking can’t be all that bad.  Until now we have had to be “in denial” about the dangers of tobacco.  But what this book has come to show is that besides making us feel good, the compounds found in tobacco might actually be helping us live longer.  The medicinal qualities of tobacco are now becoming something of record and although the general population might treat this idea with scorn, perhaps in time, tobacco will gain a certain amount of acceptance.  The Health Benefits of Tobacco may never hit the New York Times bestseller list, but it will always be a source of solace for me; confirmation that my good friend the fine cigar is just that, a friend and not such a bad guy.  And hey, over time, we cigar smokers may be looked upon as health nuts…well, maybe not.

7 Responses to “It’s official: Smoking is good for you! (well, not exactly…)”