This is a three-part article about my cigar adventure in the Dominican Republic.  Over the course of five days, I explored a number of cigar factories and visited a tobacco field at the beginning of harvest.  It was an enlightening trip, and one worth sharing with fellow “lovers of the leaf”.  I hope everyone finds my observations informative, entertaining, and inspiring.  Now…let’s go visit DR! 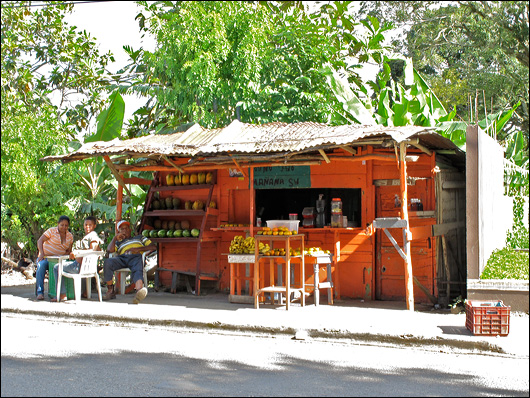 Fruit stands are common in DR.

For a cigar lover, the countries of Nicaragua, Honduras, the Dominican Republic, and Cuba, hold a certain allure.  So much so, these countries have become Meccas for cigar worshipers.  We read, with fascination, how tobacco is grown, cured, fermented, and rolled, yet rarely do we get to experience these events first-hand.  Cigar factories are not the usual tourist destination.  Trips led by knowledgeable guides are few and far between.  In  2010, I was fortunate enough to make a guided pilgrimage to the great cigar-making town of Esteli, Nicaragua.  There, I was immersed in cigar culture, and came away with an experience that was both intellectual, and visceral.  With the smell of fermenting tobacco in the air, and freshly rolled cigars in my fingers, the cigar factory experience satisfied all my senses.  It was an experience unlike any other.  But that was over two years ago.  Since then, the glow of the trip had faded, and the desire to relive that experience took hold.  Having already been to Nicaragua, my next choice for a destination was an easy one.  Cuba was beyond this Americans reach, so the Dominican Republic was where I was bound.  This past January I joined six other cigar enthusiasts for a trip to Santiago, the epicenter of cigar manufacturing in DR.  What I discovered was a cigar culture similar to that of Nicaragua, but with some very interesting differences.  This is the story of my latest cigar pilgrimage, one that was both familiar and unique. 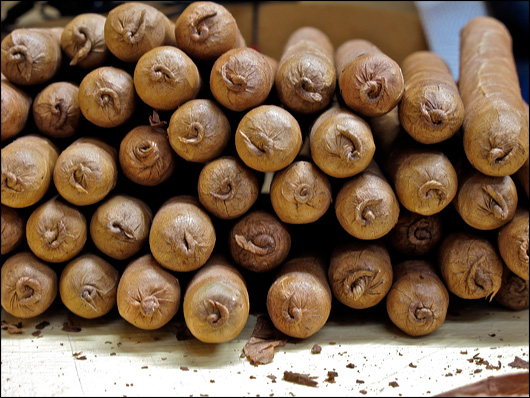 DR (that’s what the natives call it) is a lively country.  Merengue music was born there, and its fast tempo and poly-rhythmic feel reflects the spirit of its people.  With a population of almost 700,000, Santiago is a city with a lot of hustle and bustle.  Downtown Santiago has gridlock traffic, with red lights that seem more of a suggestion than a law.  Driving there is like playing a video game (get a glimpse of driving in DR here).  Yet surprisingly, we saw no accidents the week we visited.  The streets are a cacophony of honking horns, with motor scooters coming at you from all directions.  Scooters are the vehicles of choice for Dominicans, and used to transport just about anything regardless of size.  (See Hostos Quesada’s Facebook page “Only in DR”). 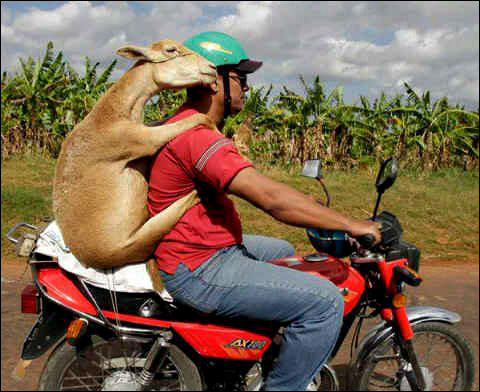 Only in DR. Photo taken by Hostos Quesada

And watch out for uncovered manholes…they can stop your vehicle dead in its tracks.  The spirited personality of the streets seems part of the DNA of the DR people.  Everyone we met had a sparkle in his or her eyes.  All were eager to help, whether giving directions, serving food, or rolling cigars, there was always a smile and a “Vaya con Dios”

With some exceptions, Dominican cigars have always had a reputation for being mild.  Many of the classic (non-Cuban) brands i.e. Cohiba, Macanudo, Partagas are made there, all mild blends.  When I chose to visit DR, I was a bit conflicted.  Strong flavors are what I crave…would I be disappointed by the cigars I’d be sampling on my trip?  Years ago, the Fuente Opus X was considered a powerhouse Dominican cigar.  But by today’s standards, the Opus X seems more like a medium strength cigar.  What I found on my first factory visit would quickly put my concerns to rest. 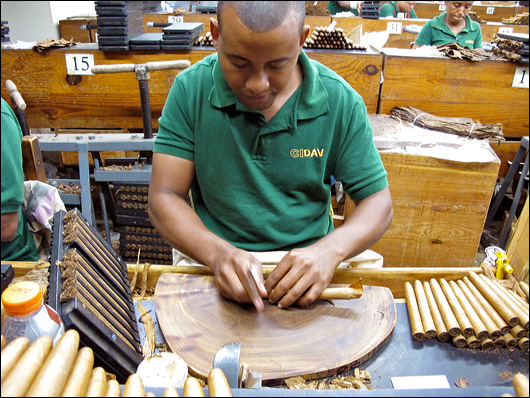 One of hundreds of rollers at Davidoff.

I’ve always considered Davidoff to be a solid product, but one that catered to mainstream smokers.  Being a follower of boutique cigars, my tastes ran more towards unique, bold flavor profiles.  Would such a company impress this “cigar snob”?  Would my preconceptions about Dominican cigars be born out so soon?  It didn’t take long to see that change was blowing in the Dominican wind.

First of all, the sheer size and scope of the Davidoff factory is impressive.  With hundreds of rollers, this finely tuned production machine really hums.  And much like the classy look of their cigars, the Davidoff factory was clean, had white walls, and well-dressed bundles of tobacco stacked from floor to ceiling.  With merengue music blaring, rollers and bunchers were feverishly rolling cigars with precision.  Our guide was generous with information, eager to explain all aspects of cigar making.

Cigar factory tours are the best way to fully appreciate the care with which cigars are made.  Guides take you through the process of fermentation, rolling, aging, and finally packaging of their various cigar brands.  You get to touch the tobacco in its raw form, and witness thousands of cigars being rolled by rows of torcedores (cigar rollers).  But what impresses a cigar lover the most is the factory smell.  It is divine.  Upon entering, you are hit with the aroma of rich, fermenting tobacco.  There is nothing quite like it.  It’s akin to a pastry lover entering a bustling bakery…pure joy.  The first whiff of that factory smell instantly reminded me of why I made this trip. 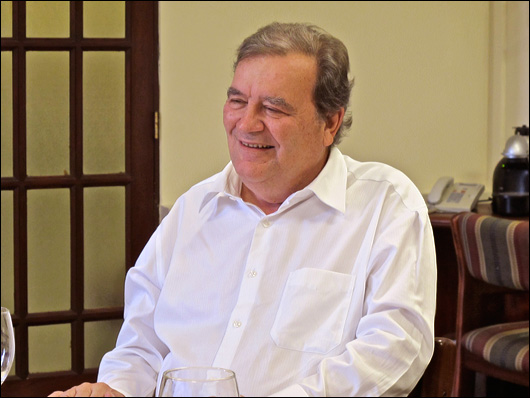 Cigars at their best.

After the tour, the generous folks at Davidoff offered us a taste of a very special cigar.  A blend constructed as a very limited edition for Avo.  Smoking a great cigar is always a treat, but when a cigar is smoked at the factory, it takes on a richness that is unequalled at home.  Like a slice of cake, still warm at the bakery, a cigar is especially fragrant right off the factory shelves.  That rich tobacco air gets imbedded in the cigar, and adds a dimension to its flavor.  Smoking a cigar blend, in the environment in which it was created, is a seductive experience.  And this cigar was absolutely delicious!  Tremendous complexity, rich tobacco flavors blended with fruit overtones and spice; this was not how I had remembered Dominican cigars.  This was my first taste of what I describe as “the new Dominican cigar profile”.  But alas, having been a limited run, that blend is no more.  It is now just a great cigar memory.  But this trip was just beginning, with more cigar adventures ahead…it was now on to: 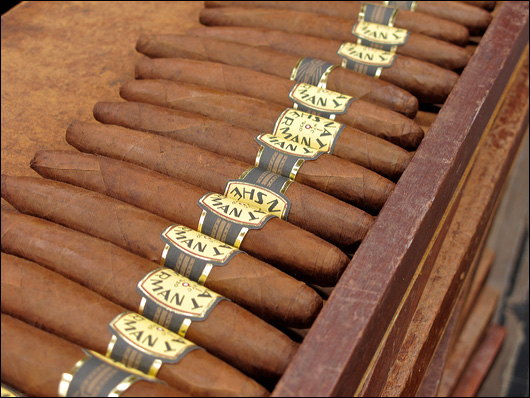 Unlike Davidoff, the Matasa facility is quaint by comparison.  Upon arrival, we were greeted by Hostos Fernandez Quesada.  He explained that the company is a family affair.  Tragically, three of Hostos’s elder relatives, all principles in the company, were killed in a 2002 plane crash.  But with added vigor, the younger relatives have led a rebuilding of the Quesada brands.  Hostos led us around the factory, all the while explaining the cigar making process.  Cigar making varies little from factory to factory.  The methods of fermentation, sorting, bunching, rolling, and boxing, have standards that were set decades ago in Cuba.  All the manufacturers of handmade cigars (Hecho a mano), follow traditional methods.  Yet different cigar companies can create flavor profiles that are distinctly their own. 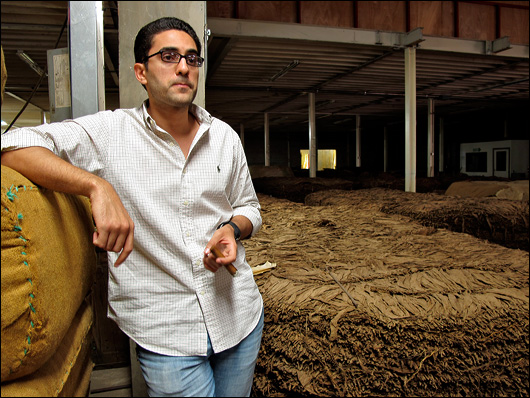 Quesada and Fonseca are two popular brands made at the Matasa factory.  Both are known for high quality and mild strength.  Yet at the end of the factory tour, Hostos presented an array of cigars that departed from the traditionally mild Matasa profile.  So, along with some wonderful Cuban style coffee, I chose to first try a cigar no bigger than my little finger.  It was the Nat Sherman Timeless No. 5, and right away I could tell this was a powerhouse.  Bold and spicy, this is a cigar that could go head to head with anything coming out of Esteli, Nicaragua1.  I was, frankly, astonished that DR could produce a puro of such strength and character.  It paired well with the sweet, black coffee, and in spite of its size, left me completely satisfied.  Hostos confirmed that in keeping with the changing tastes of current cigar smokers, it was imperative that Matasa add this style cigar to its lineup.  At this point it was clear that my preconceptions about Dominican cigars was questionable.  Both Davidoff and Matasa had conjured up new blends that challenged the status quo of the Dominican cigar industry.  But to compete with the popularity of strong Nicaraguan puros, other Dominican cigar manufacturers would need to follow suit.  This remained to be seen. 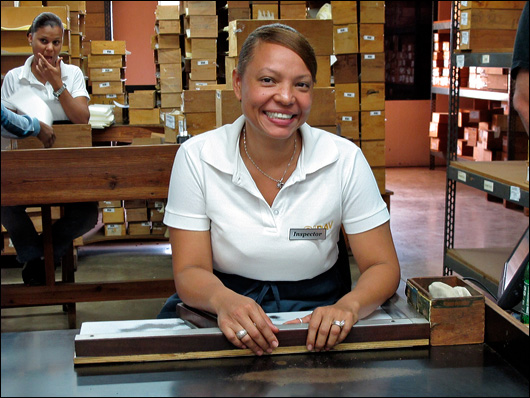 All the factory workers were friendly, and eager to share knowledge.

1 Esteli is the epicenter of the Nicaraguan cigar industry.  This region is know for its strong tobacco.

2 Responses to “The Changing Face of Dominican Cigars.”