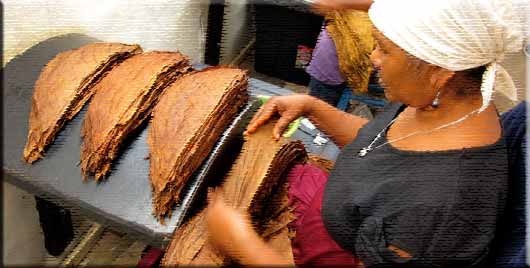 In Part One of The Changing Face of Dominican Cigars, we visited Davidoff and Matasa Cigars.  While there we sampled cigars of surprising strength, and flavor.  Only two days into the trip and we could already sense that the traditional Dominican cigar flavor profile was under a metamorphosis.  But in order to confirm this, we would need to visit more cigar factories in the Dominican cigar-making center of Santiago.  After an early breakfast at the Camp David Ranch, it was only a short ride to our next stop…

With long morning shadows streaking down the narrow Santiago streets, we could see groups of children in all directions.  Dressed in colorful blue outfits, they playfully made their way along the busy streets towards school.  Once again, the charming spirit of DR was everywhere.  This was going to be a nice day. 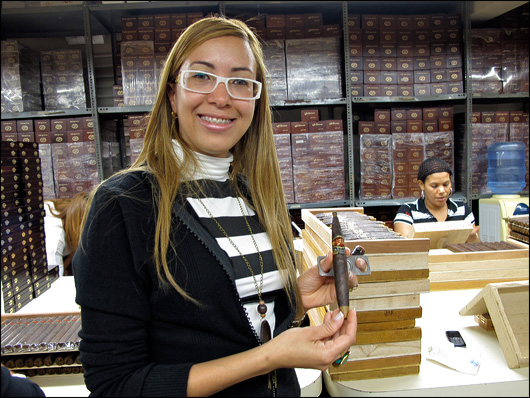 One of our lovely guides.

Suddenly turning right off the main road, we proceeded through a large iron gate into La Flor Dominicana.  Once inside, two lovely young ladies greeted us.  These were to be our guides for the factory tour.  After an apology for all the construction, (the factory was under a major expansion), we were each given a LFD Ligero toro cigar to smoke.  Perhaps it was the early hour, but within a few minutes I could feel the intoxicating effects of this strong cigar.  At that point I recalled it was Litto Gomez, the owner of LFD, who started the whole ligero cigar craze.  To my memory, it was he who first put the word “ligero” on a cigar band.  And those cigars WERE strong, and hugely popular.  After the success of the Ligero line, Litto introduced the Double Ligero.  Before long, strong cigars were an industry-wide craze.  But innovation was nothing new to Sr. Gomez.  In fact, he holds the only cigar patent in the world.  His Chisel cigars have a copyright, and no other cigar manufacturer can have its signature, tapered “chisel” cap. 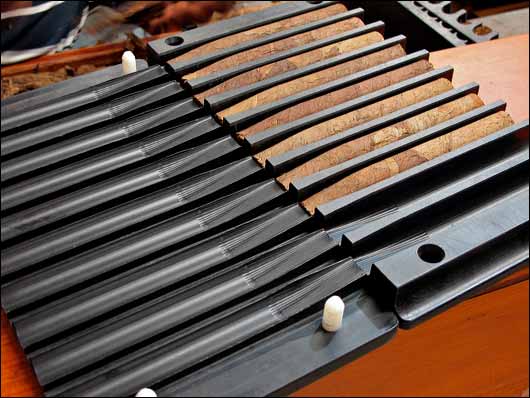 A mold for the patented LFD Chisel.

The LFD factory is a beautiful facility.  Natural woods are used throughout the décor, and the work areas are well lit and colorful.  One could tell that the workers enjoyed being there, and were proud of the product they were making.  We were led through a storage room where tobaccos from all over the world were being aged.  Nicaragua, Honduras, Ecuador…all the great tobacco regions were represented.  Next came the sorting, bunching, rolling, and packaging.  At each stage, Litto Gomez’s influence was felt.  There is elegance to his cigars, and his factory reflects this sensibility.  Right down to the beautiful stained-wood bins containing the raw tobacco.  Everywhere you looked, functionality joined aesthetics. 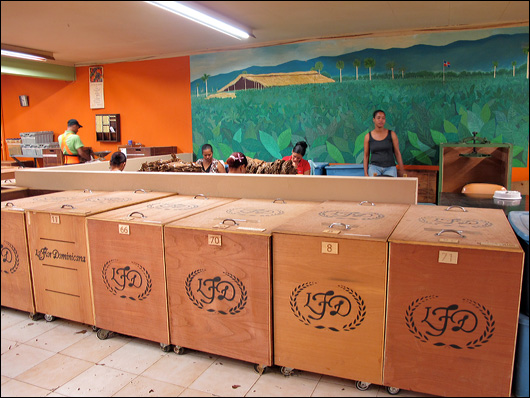 During the factory tour, I began to recall the many LFD cigars I’ve enjoyed over the years.  And these cigars were all strong, with tremendous character.  This led me to wonder; if Litto Gomez and his La Flor Dominicana cigars helped start the ligero craze…then why did I think DR was all about mild cigars?  Maybe it was a matter of the exception proving the rule.  Could the fact that LFD and Fuente Opus X are so outstanding in strength that it makes all other DR cigars seem mild by comparison?  Certainly, compared to Nicaraguan cigars, DR tobacco does seem mild.  Across the board, cigars made of Nicaraguan tobacco are strong.  It’s the nature of what’s grown there.  Unlike Nicaragua, the tobacco of DR produces a flavor profile of mild spice, with a mellow character.  Then how can this traditional DR flavor be changing?  This was a question worth pursuing.  Our next stop would lead to some answers…

Relatively new to the game, Aging Room Cigars has garnered ratings that many cigar makers could envy.  I became an early convert when the M356 first came out a couple of years ago.  I was astonished by its effervescent quality, and bright flavor profile.  I had never smoked a cigar quite like it.  This hit me at a time when I was getting bored with the dark, earthy flavors coming out of Esteli, Nicaragua.  I needed a change, and the Aging Room M356 gave me something new and unexpected. 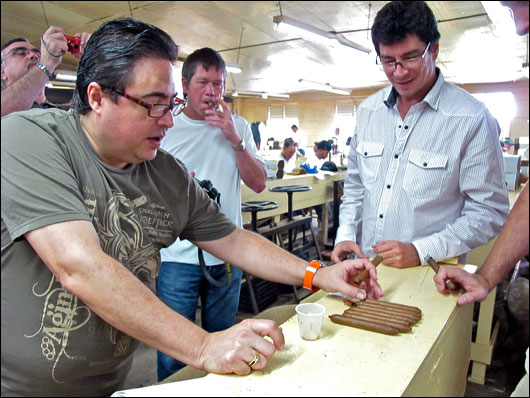 As you might imagine, the prospect of visiting Tabacalera Palma was an exciting one.  When I found out that Rafael Nodal and Hank Bischoff would give us the tour, I was anticipating something truly special…and it turned out to be that and more.  Rafael and Hank co-founded Boutique Blends, the company behind Aging Room Cigars.  Originally, these two met while in the mental health field in Miami.  But their mutual love for cigars brought them together and, ultimately, to owning their own cigar brand.  Of Cuban decent, Rafael came to the US during the Mariel boatlift.  At that time, the summer of 1980, thousands of Cuban refugees fled the island in search of personal freedom.  The oppressive Castro regime was taking its toll on the Cuban population and people wanted out.  Desperate to escape, refugees in overcrowded boats attempted the treacherous voyage to the US.  Rafael and his family, after days at sea, finally arrived safely on the Florida shore.  Those caught trying to escape were imprisoned.  Rafael’s story is an interesting one, but I digress…on to the factory tour!

Not your typical cigar factory.

From the outside, Tabacalera Palma is non-descript.  It looks like a small office building with no signage at all…a far cry from LFD.  But I was going to reserve judgment.  Once inside we were introduced to Rafael, Hank, and a principle owner of Tabacalera Palma, Jose “Joshie” (pronounced Hoshie) Blanco.  (We were also joined by Vinnie Cuello, a young member of the Palma community.)  From the moment we met, their enthusiasm for cigar making was contagious.  These guys loved their work. 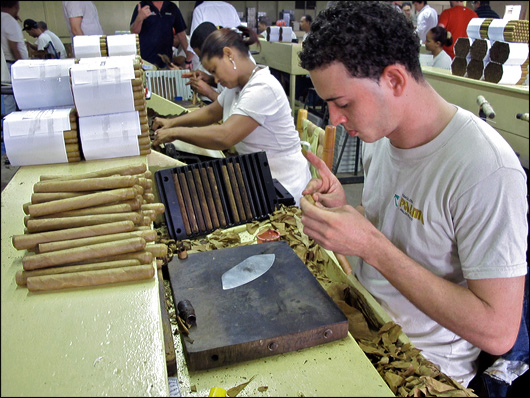 A roller at Tabacalera Palma plying his craft.

The factory itself is very plain.  Yellow walls and yellow workstations abound.  But the wide spaces and open-air feel made for a nice working environment.  Tabacalera Palma is actually two facilities.  The fermentation and tobacco processing happens down the street.  It was there that I noticed something different.  Unlike the other factories in DR, things here were less automated.  The center veins of the leaves were stripped by hand.  I had only seen that once before, in the Nicaraguan factory of AJ Fernandez.  Although insignificant in terms of the final product, it struck me that somehow these cigars were a bit more handmade; somehow more “traditional”.  (But that could be an over-romantization.) 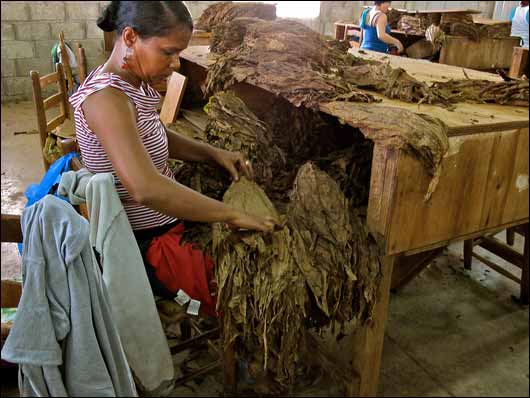 Stems are removed by hand at Tabacalera Palma.

While observing the torcedores at Tabacalera Palma, Rafael invited us to try our hands at cigar rolling.  We all took turns, and I can tell you from my experience, cigar-rolling ain’t easy.  Getting the wrapper stretched perfectly without causing a tear requires dexterity.  My stick came out okay, and smoking it months later was especially fun.  But the highlight of any factory tour is smoking the factory-fresh cigars, a truly unique experience.  At Tabacalera Palma, they took this to a whole new level.

It’s all in the blend.

For a cigar to be truly outstanding, all aspects of its manufacture must be top-notch.  From seedling to rolling, a cigar is touched by hundreds of hands.  At any point along the way, the quality of a cigar is in jeopardy.  In recent years, cigars have taken a quantum leap in quality.  This is largely due to the passion of a new generation of cigar makers.  Of course raw materials are important, but once seeds are grown, and its tobacco fermented, the last step is crucial: blending.  That is the recipe for an exceptional cigar.  Finding a great blend is about trial and error.  All cigar makers struggle to find that magical formula.  To that end, Rafael and Hank came up with a great idea…

At Aging Room Cigars, an interesting experiment is underway, The Wild Pack.  In this project, they want us to help them find their next great blend.  (For more info see Sneek Peek).  After our factory tour, we joined Rafael et al in the conference room and were presented with six trays of cigars.  There, we smoked different combinations of wrappers over three different blends.  We then filled out scorecards for each cigar.  These cigars were under consideration for the soon to be released Wild Pack project.  It was a fun experiment, and the public will be able to participate this June. 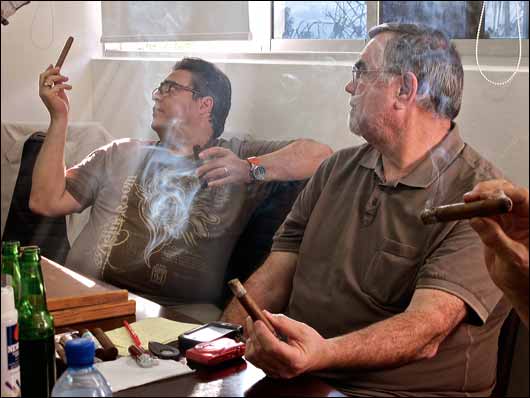 During our tasting it became clear that Aging Room is not your typical cigar company.  Their recent success of the M356 has demonstrated the advantages of small batch cigar making.  Exceptional cigar tobacco is often in limited supply.  This means that once the tobacco is gone, recreating the blend becomes difficult.  Rather than trying to keep a great cigar line alive from year to year, Aging Room is dedicating itself to the small batch philosophy.  Their main focus will be to make outstanding cigars with the best tobacco they can find, period.  Once the tobacco is used up, that blend is over.  And these guys are VERY critical.  While smoking with them at the Tabacalera Palma, it became clear that making a good cigar was simply not good enough.  We tasted cigars that other manufacturers might have released…but not Rafael Nodal.  He rejected even the good blends as not ready for production.  He was looking for excellence, and nothing less would do.  To me, this is the mark of a great boutique cigar company.  With this work ethic and hypercritical R and D, we can expect many more great cigars from Aging Room.

In Part Three we visit a tobacco field, and see where some of the strongest DR tobacco is grown.  We also tour the Fuente factory and see some unexpected things.  So, please look for the final installment of The Changing Face Of Dominican Cigars.  The adventure continues…

One Response to “The Changing Face of Dominican Cigars, Part Two.”