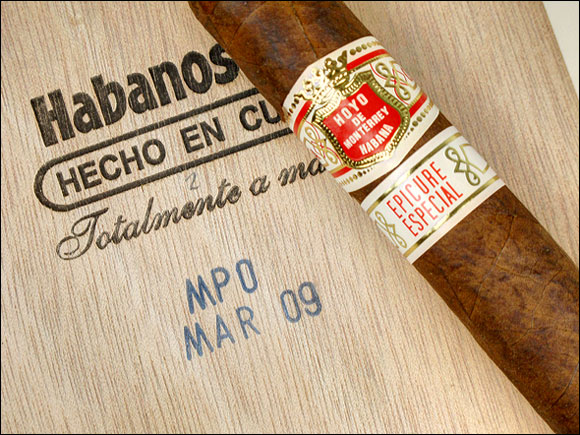 Ever notice that the highest rated cigars are usually aged Cubans?  In Cigar Aficionado, these cigars are listed in the esteemed Connoisseur’s Corner.  There, it seems, the oldest cigars get the highest scores.  For example, in the December 2011 issue, a 1956 H. Upmann no. 120 hit a perfect 100.  Coming in second at 98, was a 1959 Montecristo no. 1, followed by a 1998 Trinidad Fundadore with a 96.  At face value, it would seem that the older a cigar got, the better it would taste.  This assumption is supported by a ton of Internet chatter stating as much.  We read about how a cigar “should age well”, or a box should be “put away for aging”.  As a young (young-ER) cigar smoker, I was eager to participate in the aficionado lifestyle: collecting cigars and aging them to perfection.  I wanted to get some of that connoisseur action.  The following is what I’ve learned about cigar aging; first hand, and from others who have smoked aged cigars on a regular basis.  It’s a story of both disappointment and exhilaration.

Why age a cigar at all?

For a cigar to be good, its tobaccos must be well fermented.  This takes time, and is done in stages.  The best cigar makers carefully monitor each stage and know when the tobacco is at its peak of flavor.  It has been my experience that the best cigars are often made by smaller, sometimes family owned, cigar companies.  These boutique manufacturers are personally invested in the quality of their cigars, and their products reflect a careful attention to detail.  These cigars are always well fermented, and as such, can be enjoyed immediately upon purchase.  But if a cigar is “under-fermented”, it will taste sour and have a slight ammonia odor.  By putting these cigars away, a slow fermentation process continues inside the cigar box.  How long a cigar needs to “sit”, will vary depending on the cigar.

In this day and age, most non-Cuban cigars (NC) are fully fermented when rolled.  They require no additional storage to reach their peak flavor.  But Cuban cigars (CC) are a different story.  The current state of the Cuban cigar industry is such that demand has outstripped their supply of well-fermented tobacco.  Plus unskilled rollers are used to meet the worldwide thirst for CCs.  To my taste, it seems that the higher end CC brands get the best stuff, rolled by the best rollers, while the less expensive brands suffer.  Smoke a Cohiba Behike (at $50/stick) and you will taste beautifully fermented tobacco at its peak.  Compare that to other, cheaper brands, and you will experience a vast difference in quality.  Construction issues aside, many CCs need extra time to reach their flavor potential.  Some experts say two years is the earliest a CC will reach its peak, while others say five or more years.  Taking into account the Connoisseur’s Corner, it would seem that that longer a CC sits, the better it will taste. 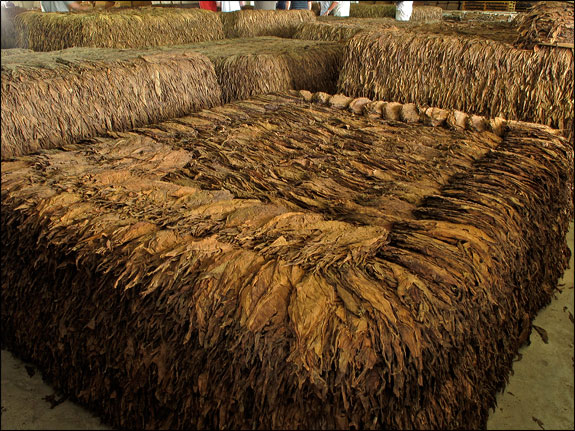 Tobacco fermenting in a pilone.

In an effort to fulfill my aspirations of becoming a true aficionado, I started collecting and aging cigars in 2005.  Reading everything I could find on the subject, I embarked on a quest for knowledge.  In the last ten years, I’ve accrued of lot of knowledge…and cigars.  Reading Cigar Aficionado has served me well.  It is a tremendous source of qualified opinions, and insider information.  Also, my pilgrimages to Esteli, Nicaragua and Santiago DR, have enhanced my love and appreciation for the cigar industry.  With more knowledge came an increased sense of urgency.  I wanted to try EVERY new cigar that had a 90+ rating.  Of course that was impossible, so I carefully chose which cigars to buy.  Over the years I’ve amassed a nice collection.  And, over time, my collection would age and get better with each passing year.  Or so I thought.

Okay, I bought some cigars, now what?

When we first buy a cigar, even just a few weeks of aging seems to enhance its flavor.  This is particularly true with sticks bought from the Internet.  Perhaps the shock of transit somehow disturbs the tobacco.  Fluctuations, in temperature, altitude, and humidity during shipping may be a factor.  After the initial few weeks of storage, there seemed to be little change in quality within the first year.  So I figured that to really get that “aged flavor”, more time was needed.  Putting boxes away for years was the only way to see, first hand, what this aging thing was all about.

Cigar collecting is challenging.  To do it right, many factors must be addressed: perfect temperature and humidity are crucial and hard to maintain; storage space can be challenging; building a walk-in humidor is costly; mold needs to be avoided; and the dreaded tobacco beetle can show up unannounced.  To keep things from getting out of hand, daily inspections are recommended.  Through the years, I have carefully stood guard against all these cigar adversaries.

The first action that affects cigar flavor is the removal of the cellophane sleeve.  Left on, the cello gives a cigar a factory-fresh flavor profile.  This is when a cigar will have maximum complexity.  Stored in cello, cigar flavors are easier to detect, and seem to be almost in relief.    Within hours after removing the cello, a cigar will “air-out”, and lose that factory aroma.  Some prefer to do this while others like the heightened flavors of a protected cigar.  Because cellophane keeps a cigar “fresh”, it significantly slows the aging process.  Some smokers remove the cello immediately upon purchase.  By doing so, they try to accelerate aging.  But is this a good thing? 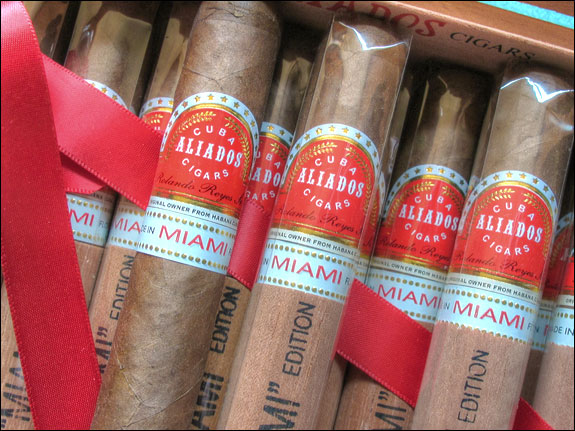 After visiting a number of NC cigar factories, I’ve grown to love the “factory fresh” cigar flavor.  These days, the best blenders are creating cigars that are meant for immediate consumption.  They use the best tobaccos at the peak of fermentation.  The question is would additional aging make these sticks better?  What I’ve found is that a great cigar tastes best a few days after the cello is removed.  This rounds-out the flavors and makes the blend taste more “homogenized”.  It’s like a tomato sauce that simmers on the stove.  At first the flavors are distinct and separate.  But after a few hours the ingredients blend in a more harmonious way.  But, like tomato “gravy” (as Tony Soprano called it), simmering, or aging, too long can make a blend taste flat.  Indeed, many of my cigars have now started to lose flavor over time.

But this is a generalization and not always true.  Cigar aging is not an exact science.  Some ready-to-smoke cigars do improve over time.  But at some point, a cigar will peak in flavor.  After that it’s a matter of diminishing returns.  Because of this, it’s good practice to sample cigars periodically during the aging process.  At some point, flavor, balance, and smoothness will merge, giving a cigar a special “je ne sais quoi”.  It is then time to enjoy the rest of the box.

So now, nearly a decade into cigar collecting, I have a lot of cigars.  Many are getting old enough to be considered “aged”.  My oldest cigars are, indeed, going through a metamorphosis.  Some of my NCs have lost flavor, while others have achieved a softer, richer quality. My collection of CCs are another story.  Just this weekend I sampled a Cohiba Siglo IV that had been aging for about five years.  Upon lighting I could tell immediately that this cigar was exceptional.  The more I smoked, the better it tasted, and when done, I had a feeling of having experienced a truly great cigar.  Until recently, I thought these cigars were simply over rated, but I now can see that CC’s absolutely need time to reach their potential.  So, it would seem that, indeed, at least five years is what a CC needs to reach greatness.  Now that this box has hit its prime, I will continue to enjoy them until, regrettably, I smoke my last stick.  But this hasn’t been the case for all my CCs.  Many of them started out rough, and five years into aging, don’t taste much better. It’s simply impossible to tell which cigars will truly age well.  Sometimes I wish I had never invested the time and money to amass a cigar collection.  But when I smoke a great cigar that only age can create, it all seems worth the effort. 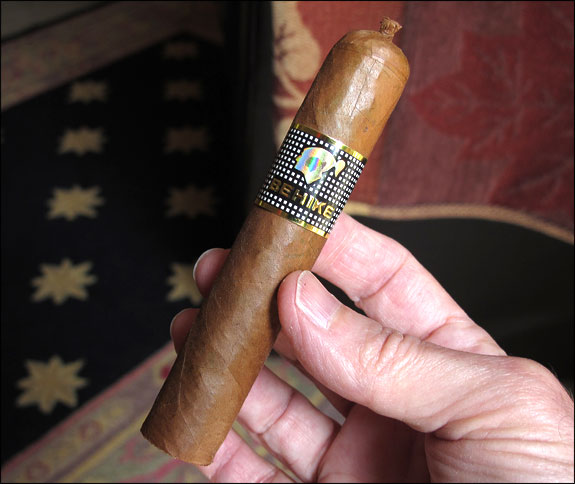 Aging the Behike is unnecessary.

Looking back, here’s what I’ve learned:

Leave the cello on.  I buy more cigars than I smoke, and don’t want them peaking before I get to them.  Leaving the cello on will slow down the aging process.  For me that’s a good thing.  I will, however, keep a few “naked” in the box for current consumption.  Boxes that arrive sans cello will be sampled more often to gauge their progress.

I prefer new NC cigars over new CCs.  The great cigar blenders of today are making some of the best cigars of all time.  They blend the richest tobaccos to create complex flavor profiles of unprecedented quality.  For these cigars, a few weeks, or months, out of the cello is all that’s needed to round out any rough edges.

Watch the temperature!  Every summer, when the temperature gets above 76 degrees, I lose hundreds of dollars worth of cigars.  The tobacco beetles come alive when it is warm, and many CCs are poorly fumigated.  That leaves them vulnerable to ruin.

The Connoisseur’s Corner is a myth.  I recently had a discussion about cigar aging with someone who has sampled many old cigars from European collectors.  He said that these cigars are fun to smoke as a novelty.  An old cigar conjures up images of bygone years, and its rarity makes it a special event.  But flavor-wise, he said the cigars are very bland.  After they are finished, he then needs to smoke something “really good”. 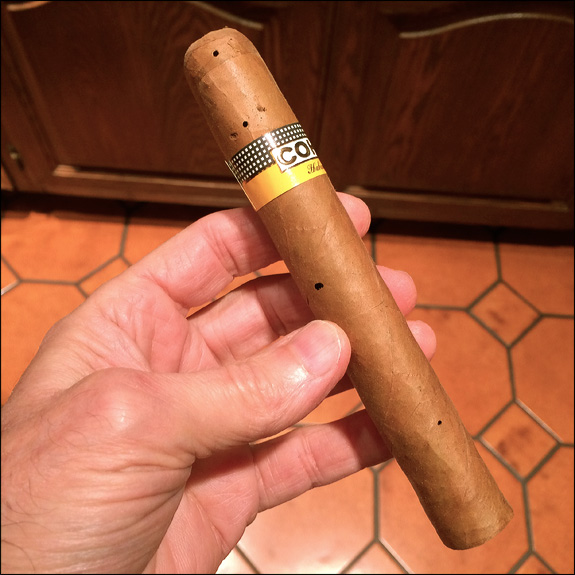 The ravages of the tobacco beetle.

So here I am, with a closet full of cigars, all in various stages of aging.  I continue to sample my myriad boxes, and make mental notes on how they are doing.  But the cigars I most often reach for, are the ones I enjoyed when new, and then got a little better with the cello off.  As far as being a true Connoisseur, I’m still waiting for my collection of CCs to get epic.  Let’s see how they do over the next ten years.

24 Responses to “Cigar Aging: is it worth the effort?”